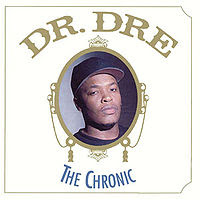 I remember being at the mall, Christmas shopping with my girlfriend in December of 1992. We stopped by Musicland, and while I was randomly flipping through the rap section, I came across The Chronic. I had been a long time fan of NWA, and while I knew they broke up, I had no idea Dre had a new solo record out. I, as the kids say, "copped that shit."

I put the cassette (yeah, that's right) in my girlfriend's tape deck on the way home, and was instantly confused. There was some dude I had never heard before (Snoop) just railing into Eazy-E, Tim Dog, and even Luke. Clearly there was some new shit going on. I spent some quality time with the tape for the next month or two, and when I saw the "Nuthin' But A 'G' Thang" video on MTV one day after school, I was surprised, but not shocked. The album was too good to not hit the mainstream.

So, like most teenage kids at the time, the album became one of my soundtracks for life in 1993. It was played at parties, always played if people were smoking grass anywhere, and it was all over MTV. And it should have been: it's that good.

Dre's introduction of a new cast of characters, a new label, a new style of music, not to mention the very timely embracing of the resurgence in popularity of marijuana smoking, couldn't have come at a better time. West Coast hip hop, and hip hop in general, was starting to slip a tiny bit. Dre brought it all back, creating songs that flowed by themselves, but especially in the context of the album.

Snoop Doggy Dogg was the most exciting rapper to come out in years, and his initial awkwardness just endeared him to us more. Daz and Kurupt were perfect as his hard-flexing cronies, and RBX and Rage were solid bit players at opposite ends of the spectrum.

This is one of those records that will always be on any "Best of the 90's" list anyone comes up with, as well as being one of the most important and influential rap records in history. You'd still be hard pressed to find somebody who doesn't know the first few lines to "G Thang."