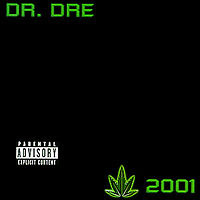 We can all act like this album is as good as the original Chronic, but it's not. It's still really great, and that's impressive enough. So, and pardon the pun, what's the difference?

Too many dudes. Too many guest spots from guys who just sound like dudes. Six-Two and Hittman shouldn't have been on this record. They're fine rappers, but on a song like "Xxplosive," next to Kurupt, they're outranked. Really, that's been my only ongoing beef with this record. Otherwise, aside from a little bit of filler and a few tracks that don't completely resonate, it's a damn fine album.

Dre's production is flawless as always, and I think while most people focus on his beatmaking skills, they forget the other part of his producer role that is integral: his ability to get great performances out of people. Snoop without Dre never sounds as good as Snoop with Dre. Same with Nate Dogg. He reins in their bullshit, cuts out the fat, and makes them as good as they really are. "Still D.R.E." was Snoop Dogg sounding like Snoop Doggy Dogg again. Finally. And "What's the Difference" is one of the best collabo cuts of the 90's, easy. Eminem's verse on that song is just way too good.

Daz is conspicuously absent, but Kurupt comes back and proves he's still got it. I was excited to see MC Ren's name on the track listing, but his guest spot is disappointing, though not his fault. It's a crowded record, and by the time you're into the 20's in the song count, it starts to feel long. But fuck it, it's Dre, and you knew he wouldn't put out another album for a long time.

"What's the Difference"
Posted by Wockenfuss at 3:45 AM