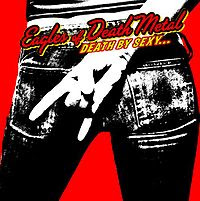 The production is a little more refined on this record, but otherwise, things haven't changed much since the first one. Nothing wrong with that, as the songs are almost as good and they're careful to not let the attitude factor overtake the proceedings and let things get hokey.

The songs on this record aren't as initially catchy as the ones on the first album, but I've found that's actually a good thing, as after giving them some time to grow on me, they actually seem to be slightly more mature than the ones on their debut. Only slightly though, as a song like "I Got a Feelin (Just Nineteen)" seems like it could have been a leftover from the first record.

Really though, overanalyzing records from a band like this is missing the point completely. They're not the type of group that's going to eventually shed their signature sound in favor of a more experimental one. They bring the rock, the lyrics are always great, and it's better "party rock" (for lack of a better term) than anything else I would choose to listen to.

Nothing wrong with a good time.