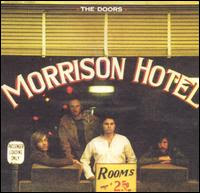 Is it utterly cosmic that we're covering my favorite Doors album on what would be Jim Morrison's 65th birthday? Nah, it's just coincidence, but I'll take it.

Morrison Hotel is The Doors returning to form in a huge way, ditching the horns and strings of The Soft Parade (not that there was anything wrong with that one-time dalliance) and getting back to the unfettered rock. They sound certifiably huge on this record, and right out the gate, Morrison sounds unrestrained and positively enthused. Maybe it's because he wrote the majority of the songs on this one, maybe it's because they're inching closer to the blues-based rock he had such a hard-on for at the time. Whatever the underlying cause, it adds up to the band at their peak, even as Morrison was headed fast down the crapper. Check his bloated mug on the cover and you can see he's gone to the bad place. Hard to believe this was only three years after their debut.

The songs on this one are all fantastic. Let's do it:

"Roadhouse Blues," a song I've heard way too many times but still hold some affection for, comes chugging right out the gate with Krieger's deep guitar plunking and Morrison bellowing like he really means it. And really, the "woke up this morning and got myself a beer" line is fucking fabulous any way you shake it. So are Morrison's ad-libbed scats in the bridge.

"Waiting for the Sun," a song you would have figured to appear on the album of the same name, apparently didn't get the finishing touches until two years later. Whatever, it fits in perfectly here, with Krieger's guitar loping and fiddling over Morrison's strong-as-shit vocals. "This is the strangest life I've ever known" = an awesome way to sum up Morrison's travails at the time, and a perfect line for this song.

"You Make Me Real" is a rolling piano frolic that features Morrison sounding better that ever, though he does sound a bit drunk as well. The way he slurs "Let me slide into your tender sunken sea" works perfectly, especially when punctuated by the almost knee-jerk sounding squeal he lets out right afterward. I never grow tired of this song.

"Peace Frog" would easily make my top ten list of best Doors songs, if not my top five. It's one of the only Doors songs with Morrison's vocals divided in a way that he sounds like he singing along with himself, and when it's stacked on top of Krieger's guitar line with the rare use of the wah-wah, it's just unstoppable. When it vamps at the end and Morrison starts crying out and rides it to the end, it just works in every way. And the lyrics are sweet, especially when the title has nothing to do with them.

"Blue Sunday" is the second half of "Peace Frog" in that they're joined by a bass line that never stops, but otherwise the songs don't seem to have anything to do with each other. This is a straightforward love song, and they wisely keep it short, adding to its effect. Morrison sounds sober and sincere, and it works well.

I think I heard Ray Manzarek once refer to "Ship of Fools" as one of the first "Ecology Rock" songs, and though that may stake too much claim in his Morrison-as-prophet tendencies, there seems to be some truth to it. "Smog gon' get you pretty soon...," etc. In the end, it's just a damn fun song.

Putting "Land Ho!" right next to it makes perfect sense (though on the LP they're separated by being on different sides of the record), because they sound a lot alike, and the aquatic-themed lyrics link them as well. This one is fun too, sounding celebratory and driving continuously towards a big finish that starts once Morrison yells out the title. This is Morrison beginning his big lean towards blues-base structures for lyrics, too.

"The Spy" is a slow groove, and though the lyrics are standard Morrison fare, they match perfectly with the creeping lull of the track. This one too, is bluesy.

"Queen of the Highway," though a tad bit too transparently autobiographical for my taste, is a great song. There's not really a discernible chorus, and the band just keeps pushing ahead, while diverging into some solid breakdowns. It's a rocker.

"Indian Summer," I found out fairly recently, was an old Doors composition, resurrected here and given proper treatment. I love this little song, though it's quite simple. It's short, but Krieger does some great stuff with it and Morrison sounds strikingly lucid.

"Maggie M'Gill" is, other than the shoe-in "Peace Frog," the best song on this record. Morrison sounds possessed, and Krieger breaks out the slide and goes ballistic. Morrison's lyrics are rife with tragedy (shocking), and though the blues influence is there, the real strength is just in the layers of gritty guitar and Manzarek's rolling bassline. There could not be a better closer for this record.

So yeah, I could really make a case for any Doors album being their best one, but I've always been pretty confident in this one being my favorite. It's a somewhat disconnected batch of songs that work really well when they keep coming one after another. And ol' Jimmy really sounds like he means it.