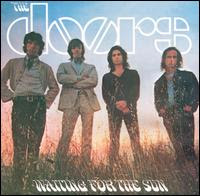 Once you get past the first two songs on this one, it's flawless. I think some folks may not consider this one of the Doors' stronger albums, but that's tough to back up. The only real beef most Doors fans have with this one is that is was supposed to include the oft-fabled "Celebration of the Lizard," and instead you get one small part of it and the lyrics on the inside, which is just a tease. Sure, it would eventually show up on "Absolutely Live," but we never got a proper studio version. Anywho, I love the shit out of this record. I have listened to the second side of this one more times than I care to admit. Let's do it:

"Hello I Love You" is a strong candidate for worst Doors song. It sounds like nothing the band had ever done previously or would ever do again. On certain bootlegs you can hear Manzarek singing it because Morrison refused. And he was the one who wrote it. Yikes.

"Love Street" is a fine song, I guess, but I've never liked it. It seems lazy, and I always thought the lyrics were pretty weak for a Morrison composition. And the piano part makes the entire vibe just way too happy. Though it doesn't end up being a particularly happy song, but that "so far" tacked on at the end always struck me as obvious and corny.

"Not to Touch the Earth" gets us back into Doors-worthy quality. This is the only piece of "Celebration of the Lizard" offered here, and if this is all we get, it's much better than nothing. Manzarek's keyboards are steady and somehow manage to sound insane, and Krieger mirrors it with nutty guitar work that pluck and hammers and works perfectly. The breaks are many, and when they kick back in, the force increases every time. I've never grown sick of this tune.

"Summer's Almost Gone" is an old song, one that shows up in much worse form on some of their early demo recordings. Maybe this seems lackluster to some folks, but I've always really liked the layered pianos and Morrison's easy but sincere approach to the vocals.

It's followed (sensibly, I suppose) by "Wintertime Love," a song that I had a hard time getting into in my youth because I was obsessed with the darker material. I don't want to look it up right now, but this has got to be a Krieger composition. The lyrics are way too basic and the melody way too lilting. Still, it's nice and short, and Morrison fills it out well with deeper register in his crystal clear vocals.

"The Unknown Soldier" wraps up the first side. It's a cool idea, and really a pretty great song, but I'm not a huge fan of this song anymore. Seeing them do it live (on VHS) was a hoot for me when I was a kid, but now I just look forward to the throttling vamp at the end, and often don't have the patience to wait for it.

"Spanish Caravan" begins the second side, and it's a song that blew my mind when I was young. It did nothing less than convince me that Krieger was a full-blown guitar virtuoso, a man who could handle any style of music. He still sounds great on it, and so does Morrison. A really odd and fantastic song for them.

"We Could Be So Good Together" is a little "Hello I Love You" sounding, but it's better. Not the group's strongest composition, but I never skip it. It fits in great on what, as I've said, I consider a strong side two. Krieger goes a little nuts on his solo and you don't really see it coming.

"Yes, The River Knows" is about the most delicate song the band ever did. I could see some people being turned off by the lite-ness of it all, but I'm pretty sure it's, in the end, about drowning. And I think the melody is strong as shit.

When I read that Jim Morrison was falling-down drunk when the group recorded this song, it all made a lot more sense to me. Rarely has he sounded so out of his mind on a studio recording. It makes for a great song, and, particularly in the second verse, his slurring just adds to the build of the eventual chaos. I always think I'm getting sick of this song, then I listen to it and realize I think it's fantastic. Morrison's rambling at the beginning and the end are priceless.

"Not To Touch The Earth"
Posted by Wockenfuss at 2:18 AM