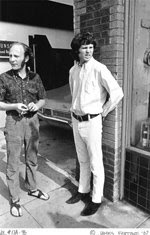 Not a big enough picture, but what can you do. Paul Rothchild's on the left, there, taking a break from recording and hanging with Jim Morrison.

Rothchild, while mentioned quite a bit in conversations that really dissect the music of The Doors, doesn't, in my opinion, get quite enough credit. He produced all of their records, aside from LA Woman (Which he walked away from), and was really the fifth member of the band. The man initially reigned in the musicians, eventually (and quite quickly) crafted The Doors' sound, and made their records much better than they ever would have been without him. And this was in the days of four track recording.

Best of all, when he felt the band was losing it, he told them to eat it, and hit the road. A bold move.

He passed away in 1995, but if you look real close you can catch him in The Doors film, and you can read a super informative (Doors nerds get ready!) interview with him from 1981 here.
Posted by Wockenfuss at 2:11 AM

Thanks for keeping Paul alive. He was a rare guy. He took me under his wing in the early eighties. His son Dan is doing well with the genes.