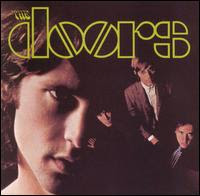 I mentioned in my Beatles Hey Jude post that there were three LPs that shaped the way I initially viewed rock music from an early age. This is the second one we're getting to, and it's arguably the most important, definitely the most influential.

I need to preface our run through the superb Doors catalog with some candid asides:

First off, I love The Doors. If you're one of those people who hates them, that's fine. It's none of my business. But admit it in conversation, and you risk some silent but harsh judgment from me as I try to decide if you're lazy or just stupid.

Second, my early teenage years were spent absolutely immersed in this band. It was the only music that really mattered to me. I listened to plenty of other shit, but The Doors and Jim Morrison were always placed on their own pedestal. I found out later I wasn't alone in this; in fact, it's a pretty common rite of passage. But when you're into The Doors, you feel like nobody ever "got it" like you did.

Third, I am unrelenting on my opinions of this band. Prepare for me to praise all of their albums way too much.

Fourth, I am not sure if I have a copy of Absolutely Live on CD or LP. That could be a problem. I'll see if I can get one before we come to it. I may just write about it anyway. You have no way of knowing what I actually own.

The Doors' eponymous debut is a legendary record, one of the most celebrated LPs of the 60's, and with good reason. You already know all there is to know about "Light My Fire," so we'll mostly skip that. The depth in this record is in the songs that surrounded it. Fuck it. Let's track-by-track it.

"Break on Through (To the Other Side)" was strangely released as the band's first single, and though it's a tremendous track, I'm not sure who thought it would have hit potential. It's still a great song, and if you listen to any of the live stuff from later in their career, it's really interesting to see how the song evolved into a more groove-oriented number.

"Soul Kitchen" has always been, for my money, one of the most underrated Doors songs. (Not that it doesn't get recognized plenty, it's just often overshadowed.) The lyrics are fantastic: "Your fingers weave quick minarets/Speak in secret alphabets/I light another cigarette/Learn to forget." And, it's a great example of how vital Ray Manzarek was to this band.

It's between that one and "The Crystal Ship" for my favorite song on this record. Most days, I think I'd have to give the nod to "The Crystal Ship." It's classic Doors eeriness, coupled with lyrics that used to haunt me in my sleep. And the melody is much more complicated than it seems. A really smart song.

"Twentieth Century Fox" has actually grown on me over time. It seemed like filler and very "un-Doors-like" to me for a long time, but I realized I was hung up on what seemed like corny wordplay in the chorus. The lyrics aren't mind-blowing, considering what Morrison was capable of, but it's a solid song.

"Alabama Song (Whiskey Bar)" is fun the first three thousand times you hear it. I finally sort of grew tired of it a few years ago. An interesting song to cover, but sort of an odd one out in the Doors catalog. I guess I prefer their original material...

"Light My Fire" is the song most often associated with the band, and I've just heard it way too many times. I could hum all the solos for you in the long version. So, that's sad, I suppose.

"Back Door Man" is another cover, but Morrison's guttural growling on it made it seem like a real Doors song. Feeding off the obvious sexual connotations, this is a song that showed the Doors really working as musicians, building to precipice and letting Morrison just wail it out to relieve the pressure. I never tire of this one.

"I Looked At You" is a song that I always pictured the band writing in haste to appease some label guy who was looking for something for the teenybopper set. This song is only notable for being the Doors' laziest composition. But it's short.

"End of the Night" is a dark creeper, a song that features Morrison in full-on prose mode. It's structurally strange as well, never really deciding on a proper chorus or verse. The lyrics are great, and if you pay close attention to what Robby Krieger's doing on the guitar, it's impressive.

"Take It As It Comes" is almost in the same league as "I Looked At You," but it gives the musicians more room to spread out and ends up being a stronger song. The lyrics are a bit generic for my taste, and the "specialize in having fun" line always struck me as awkward at best.

I bet I wasn't even ten the first time I heard "The End." I had no idea what the hell was happening, and probably was wondering why the song was so damn long. I've learned to love this song, and I don't know what it is, but I've always felt this was one of Morrison's standout vocal performances. When he comes in in the beginning, he just sounds flawless. People love to clown this song, and that's fine, but if you consider the year this came out, the content and length of the song, and the fact that people reference every line from it, you have to admit it's an indelible performance. I also think it's some of John Densmore's best work, and a bold way to end a debut album.

If you're 17, get stoned and listen to this on headphones. Really, you owe it to yourself.

"Break On Through (To The Other Side)"
Posted by Wockenfuss at 2:20 AM

Ahh, I was waiting for these. I have heard this record a few too many times (I wonder why) but as an album it is still pretty undeniable. I don't know why but "Soul Kitchen" has never done it for me. I know that I am the one who is wrong about this and still don't know why it doesn't hit. "20th Century Fox" is really the only song on here that seems out of place. It's surprisingly...normal. Nowadays I have to be in the right mood for "The End" but when I am, it still pretty much rules. Actually, pretty much all of your comments match my thoughts. I loved the song by song approach.