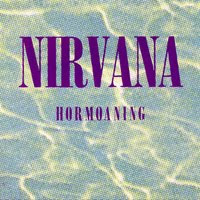 This six-song, import-only tour EP started making the rounds via cassette dubs shortly after its release, and though I heard a few people had actual copies of it, I don't recall seeing it in person until at least a year after I heard it.

It's a cool mix of songs, with four covers and two tracks ("Even in His Youth" and "Aneurysm") that had already shown up on versions of the "Smells Like Teen Spirit" single. Of the covers, two of them are Vaselines songs ("Son of a Gun" and "Molly's Lips"), one is a Devo cover (the very un-Nirvana "Turnaround"), and one is a Wipers song ("D-7"). Of those four, three would end up on Incesticide, leaving "D-7" as the most rare track on this record after all was said and done.

I dug the shit out of this when I first got a copy, and listened to it quite a bit. The Vaselines tracks were simple but short, and the Devo song was so odd that it always got a rise out of me. The version of "Aneurysm" here is the same one from the "Teen Spirit" CD single, but it's not the same version that would end up on Incesticide. And strangely, "Even in His Youth" was not included in that compilation at all.

"Aneurysm" is really one of the quintessential Nirvana songs, and I've never really understood why it wasn't released on one of their proper albums. I guess I could see how it didn't really fit on Nevermind, but man, it's just such a strong song, and one of the only ones that really encompasses everything that was great about Nirvana in one track. The other highlight of this EP has got to be "D-7." It's just so aggressive, and given where it starts and where it ends, that build-up really emphasizes its strength.

Here's the deal on owning a legit copy of Hormoaning. It's tough to pull off. There are tons of fakes floating around. I have a CD copy, from Japan, that I thought for sure was real, and I've since (via info from this site) come to the conclusion that it's counterfeit. I didn't pay a ton of money for it, but I'm still bummed. There were only 4,000 copies of the EP pressed on vinyl in Australia, and those are the only vinyl copies that are real. They're pressed on red and blue swirled wax, and other than the original "Love Buzz" single, they're arguably the most sought-after Nirvana record. They're expensive, but I'm determined to get my hands on a copy. They're not technically out of my price range, but it's more in the lying-to-my-wife range of things. It's a slippery slope.

There are legit Japanese copies on CD (with the cover like the one above), but distinguishing between a real and a fake without holding it in your hands is near impossible. And I'd rather have the vinyl anyway. Time to start saving.

"D-7" has always been one of my favorite Nirvana tunes and I never understood why they left it off of "Incesticide." You know how earlier I said that I have been to the holy grail of record collections? Well I have held an original copy of "Hormoaning" on vinyl in my hands. It had a strange silk screened burlap sleeve on the outside of it. Oh wait, I held 4 of them. It was pretty awesome.