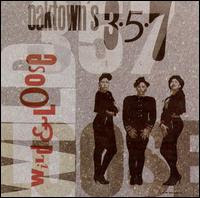 Back in '89, I saw a video for an Oaktown's 357 song which I thought was called "Get Loose." I knew, even at the time, that it was a terrible song, but damn if the chorus wasn't stuck in my head for weeks. For years afterward, whenever I thought about the group, I thought about their asstastic dance moves in the video, and that chorus: "3-5-7 - get loose!" Just shameful.

So, when I came across this CD in a dollar bin a few years ago, I figured I'd pick it up. There was no song called "Get Loose" listed on the back, but the album title made me pretty confident that the song was on it and it must just be titled something different. (Though I was a bit worried, because with a group like this, the label's looking to make it very clear that the single is on there. But then sometimes they put a sticker on the front clarifying the nondescript title. Whatever.) I get the thing home, listen to it, and wouldn't you know it - the song's not on there. But, the first song on the record - "We Like It" - uses the exact same sample that's on the "Get Loose" song, and contains a chorus that kind of sounds like the one in that song, too. Hmmm.

Now check out this version of the video. It lists the title as "We Like It," and the album as Wild and Loose. This video has the song title listed as "Wild N' Loose," and in the comments, the dude posting it says it's a "remake" of "We Like It."

At this point I just wanted to know if the song was ever released on wax. After some light digging, I think I found it. Good ol' Discogs. Looks like the group released a two-song 12" (and also a CD promo) that contained the "Video Version" of the song. The date on those is 1990, so it must have been a standalone release after the album didn't do well...? Because it's not a remix. The lyrics are completely different.

The Ultramagnetic MC's pulled almost the same shit with "Traveling At the Speed of Thought," with this version and this version. But that's another story.

Anyway, this album is terrible. MC Hammer wrote all the songs, and the lyrics are brutal. But I guess it was about the dance moves.