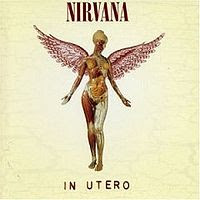 When I saw Nirvana at the Portland Meadows in September of 1992, they played a few songs I hadn't heard before. I thought one of 'em was just a live jammer, but it turns out it was an early version of "Tourette's." The other two were starkly more memorable, as they were clearly almost-finished new Nirvana songs. One was "Rape Me," and the other was "All Apologies."

"Rape Me" stuck with me just because of the lyrics. I would also later see footage of Nirvana playing the first few bars of it the MTV Video Awards, which took place the night before the Portland Show. I don't remember it airing the night before the show that I went to, though it may have. I'm pretty sure I didn't see it that night, though. It's not important.

"All Apologies," aside from having one of the most instantly catchy melodies in the Nirvana catalog, haunted me because our local favorite video show, Bohemia Afterdark, played a short videotaped clip of it (from the show) the week after the concert. My brother and I were excited. We had no idea what the song was called, but man it was catchy. So, when In Utero was released almost exactly a year later, I expected those tracks to be on it. And they were. But other than that, I didn't know what to expect.

(Funny aside: I remember listening to In Utero for the first time with my brother and we kept waiting for "that song" to come on while we were enjoying the record. By the second half of the second side, we were starting to get worried. And then, boom. There it was. The last track. It was called "All Apologies." It was even better than we imagined it being. And all was fine again.)

For a while, I thought Cobain starting off the most anticipated album of the 90's with the lyric "Teenage angst has paid off well" was a bit much. I've since come to believe that it was a pretty sweet move; by getting that out of the way early, it became an acknowledgment that sort of shielded him from any criticism in that area. It just seemed very un-Nirvana at the time. And so did the song. But I was ready to head down any road the band wanted me to follow, so I learned to love this album real quick.

If they set out to make a less polished release than Nevermind (and they did), they pulled it off. This thing is screechy, sharp, and the drums are fucking huge. It makes for a very different sound, but it serves the songs well. Tracks like "Milk It" and "Scentless Apprentice" were deliberately challenging the listener, but songs like "Very Ape" and "Frances Farmer Will Have Her Revenge on Seattle" were instantly easy to love. Both of those songs still sound great.

"Pennyroyal Tea" was never one of my favorite Nirvana songs, and I think I'm in the minority on that. At track 9, it's put in a good spot on the record, though. The three songs that follow it, "Radio Friendly Unit Shifter," "Tourette's," and "All Apologies" are a great trio to end this record on, especially considering it would be Nirvana's last proper record. The fact that "All Apologies" is the last song on the last Nirvana album just makes too much sense, and it's beautiful, sad, and maddening all at once.

So, yeah, this would be the last Nirvana album issued while Kurt Cobain was still alive. And while it's not regarded in as high esteem as Nevermind, it's usually not placed far below that record in terms of quality and influence. And that's the way it should be. I'd argue that it's an equally important record in terms of the quality of the music, but the shitstorm that Nevermind started will never be equaled. I didn't know what to expect from Nirvana's post-Nevermind output, but I was never disappointed in this record. I've listened to it thousands of times, and it still sounds great to me. "Dumb" and "Rape Me" haven't aged super-well, but "Heart-Shaped Box" and "Serve the Servants" still sound as powerful as ever.

I have this LP on clear vinyl, from the original limited edition that was released (I believe) when this album came out. "Limited edition" is a relative term, but this thing is still in demand. And it should be. It's a great record.

You know, "Pennyroyal Tea" has always been one of my least favorite songs on there's as well. I differ with a few of your opinions on the tunes though. While I agree "Rape Me" has not aged well (I didn't really like it back then anyways) I think "Dumb" is still as great as ever. "Heart-Shaped Box" is the one that I have heard too much and just doesn't hold the same power.

I remember really liking this record when it came out but was always annoyed that they made an effort to make it more rough. It seemed like it was being difficult for difficult's sake. In my older years I have learned to simply love the record for what it is. "Scentless Apprentice," "All Apologies," "Dumb," "Tourette's," and "Very Ape" are some of their best tunes. And I think the record did serve Nirvana's purpose which was to try to reestablish themselves as a somewhat rougher sounding band.

One one of my earliest bands used to do a terrible cover of "Scentless Apprentice" and a pretty decent cover of "Tourette's." That is such an awesome song.

Oh, and I forgot to say that I always admired that they delivered such a great record for what had to be one of the most anticipated follow-up albums of all-time. Weaker bands would have crumbled under the pressure. See Raekwon's "Immobilarity."