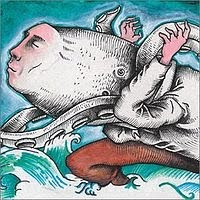 After reading tons of rave reviews for Okkervil River's 2007 LP The Stage Names, I listened to it online, loved it, bought it, and then quickly bought the band's two previous releases. This is the first of those two, though it's the group's third full-length overall.

A bit about Okkervil River, before I go through the few of their albums that I own: I've never been able to put a finger on exactly why I like this band. Like a few other groups that I almost guiltily enjoy, I feel like they're constantly inches away from being a group that I despise. Will Sheff always sounds like he's about to cry, the tracks are often frustratingly delicate, and they're sometimes painfully slow. But when I'm the right mood, the tunes really do it for me. Dude's got a knack for melody, and although his lyrics can get pompously literary, I always find that's way better than throwaway lines.

So, as I said, I started out on The Stage Names, and worked backwards to this one. I was pleasantly surprised to find that the band's sound had barely changed between records, and what I like about their then-newest one was still a part of the sound on this older release.

The band's not for everyone, but if you like your indie folk/pop timid with the occasional build-up-then-controlled-explosion, cuts like "It Ends with a Fall" and "The War Criminal Rises and Speaks" should do it for you. Some of the songs here push the five-and-six-minute length markers a little too hard, but often I don't notice. And that's a good sign.