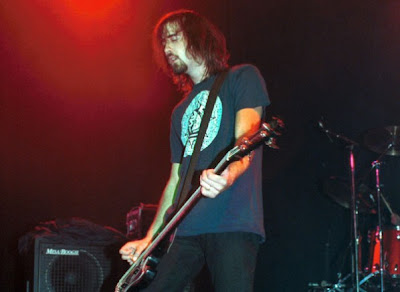 It somehow always seemed perfect that the bass player for the biggest band in the world was a six-and-a-half foot tall goofball with a constant grin on his face. While Kurt Cobain was diminutive, quiet when he wasn't screaming his songs, and often overly serious, Novoselic seemed to be the exact opposite. He was tall, slightly mouthy, and he really just seemed happy to be along for the ride.

I still love the story of Novoselic getting black-out drunk, stumbling over to Jonathan Poneman's (or was it Pavitt's?) house, and demanding that Nirvana be given a written contract from Sub Pop. This was after he was belligerent at their initial meeting with the label, almost screwing up the deal. He ended up doing Sub Pop a favor: when it came time for Nirvana to jump to a major, they still owed an album to their current label. DGC had to cut Sub Pop in for profits on the new shit, and it's been said that that drunken contract saved the label.

Anyway, not trying to get off on a tangent here. It's just a funny story. And Krist always struck me as a funny guy, and a genuinely nice one, too. And while you won't often hear him praised for being a superb bass player, go back and listen to the bass lines in tracks like "Lounge Act" and "On A Plain." They're doing a lot more than you think.

He should also be commended for maintaining Nirvana's legacy (to the best of his abilities) and involving himself in social issues when he could just as easily lay back and wait for the next Nirvana retrospective. The list could go on and on. The guy's a stallion. I know it and you know it.

He currently blogs for Seattle Weekly, and you should check that shit out.

Stallion.
Posted by Wockenfuss at 9:55 PM