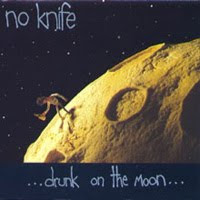 Man, it's been a while since I've listened to this one.

I know I saw No Knife live once, when they were opening for Pond, but I think I spent most of their set in the 21+ area bugging one of the dudes from Pond for insight into some of his more obscure lyrics. Yes, I am that guy. But I do remember catching at least part of their set. But that's all I remember.

I don't remember when I bought this LP, but I think it was fairly recently. One of those random finds at a record store that I was happy to cough up five bucks for. No Knife sort of sounds like what overly confident bands on the Warped Tour probably think they sound like. It's slightly poppy punk on the surface, but calling their music that doesn't do it much justice. These guys can play their instruments, and while they can write a solid hook, they don't harp on it. They're happier to incorporate weird-ass breakdowns and instrumental sections that get challenging.

They're like Superchunk, but with a bit of Fugazi in there. It's a solid mix, and though this album sounds a little dated now, it's still sounding pretty damn good to me. "Ginger Vitus" is sounding strangely familiar.

Clearly I don't know this album very well, but I'm happy to have it. Hopefully I'll randomly find some of their other shit one of these days.

Can't find a lick of audio or video for this one...
Posted by Wockenfuss at 10:48 PM

Holy crap this album rules. Yes, you did see them with Pond and yes, you did spend the majority of their set in the bar. Which is too bad because No Knife absolutely rip. I was introduced to them through Fargo. I think he saw them in '97 open for someone and bought this record. I always thought it was hilarious because Matt listened to about 3 records at the time: Elliott Smith's "Either/Or," Hayden's "Everything I Long For" and this. Gee, which one doesn't belong. Also, Fargo doesn't go for pop punk. He bought it because he was blown away by the musicianship live. And that's really the charm of this band. To the non-musician, these songs are all catchy and pretty mixtape worthy. However, as an added bonus for the musician listener, the songs sound pretty impossible to play. Complicated and catchy. That's a pretty hard goal to achieve. Heavens, just Ike Zaremba's drumming makes me drool everytime I hear this, let alone the guitar and bass parts. Sweet, sweet Zaremba.

"Be Mini," "Ginger Vitus," and "Habits" are all insanely catchy tunes and make for a great start to the record. Then tunes like "Punch n Judy" and "Ephedrine" slow things down a bit but really let them flex their musician muscles. It's a shame that you don't have their follow up, "Hit Man Dreams," because that is where they really take off.

"Ginger Vitus" probably sounds familiar because I'm sure I mixtaped the crap out of it. That one and "Habits" were my mixtape gems.