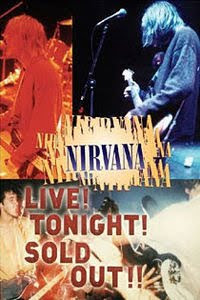 I bought this on VHS, lost it, bought it again on VHS, and then just recently picked up the DVD, which was released a few years back.

I've always loved this movie. Not only is it well made, but it contains rare (or what used to be rare, pre-YouTube) footage of the band that is usually notable for one reason or another. There's the part where Cobain get punched by the bouncer during an particularly spastic version of "Love Buzz," the part where Cobain sings "Smells Like Teen Spirit" in a deep timbre over a backing track on a foreign TV show, the part where the band is on another show and is announced as playing "Lithium," but they instead play "Territorial Pissings" and wreck all their shit, and lots of other good stuff.

It might not be for the casual Nirvana fan, but if you enjoy seeing a bunch of random Nirvana performances and interviews spliced together, it's fantastic. The editing is weird enough to keep things interesting, and the pace of the whole thing never slows. I've watched this movie at least ten times, and I still love every minute of it. The band put it together (some before Cobain's death, some after), and that's probably why it's so great. It's definitely a "warts and all" sort of affair, and I've always felt that that was part of its charm. Some of the live performances are rough to say the least.

The DVD added a handful of full live songs from a 1991 performance to the VHS release, as well as a rehearsal version of "On A Plain" that rolls after the credits. The audio on that bit is awful, but watching the band in their practice space is awesome.

Watch the trailer here.
Posted by Wockenfuss at 1:57 AM