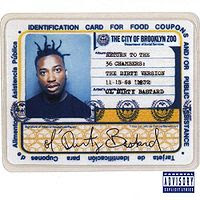 This was only the third official Wu-Tang release (after Enter the Wu-Tang and Method Man's Tical), and it kept the momentum going, once again proving that the Clan was the strongest force in hip hop. This album was nominated for a Grammy, and while it didn't win, it should have. When people say that ODB was an original voice, or a misunderstood genius, or whatever, this is what they're talking about.

This is the Ol' Dirty Bastard LP. The one with RZA. The one with a bunch of the Clan dudes popping in and out. The one where he sounds relatively coherent and even articulate in spots. Trying to explain the approach of this record is impossible, because I've been listening to it for 15 years and I still don't really understand why it's as good as it is. I mean, I do - the beats are insane, Dirty is over-the-top entertaining, and there's not a bad song on the damn thing - but it just seems so nuts that Dirty actually pulled this off.

In the context of the Clan, he was a force. His verses on Enter the Wu-Tang are fucking fantastic, but when listening to that album, I couldn't picture him being more than a team player, a brilliant juxtaposition for the more dead-serious rhymers like Masta Killa and GZA. The thought of listening to him rap, sing, and single-handedly (mostly) carry a collection of songs for an hour straight didn't seem wise to me.

I was way off.

If you listen to the five-minute intro on this record and recognize - even though you might not be able to put your finger on why - that it's like nothing you've ever heard before, then you'll get it. And when "Shimmy Shimmy Ya" kicks in after that, there's not going back. "Brooklyn Zoo" will go down as one of the best Wu songs ever, and "Protect Ya Neck II The Zoo" remains one of the dopest posse cuts on record.

More than anything, I love the fact that Dirty made this record before he really lost it and things got too fucked up for him to be the nutball he wanted to be - the one who was crazy, sure, but the one that could also rap his ass off. And he does a lot of that here.

"Brooklyn Zoo"
Posted by Wockenfuss at 1:34 AM

Yeah, this album is pretty unbeatable and certainly appealed to my high school sensibilities. I have rocked this album like few others and you're right, it shouldn't be this good. I too was a little skeptical of being able to handle an album of ODB. I'll be honest, he is not my favorite member of the Clan. I always thought that people that put a huge emphasis on ODB didn't really get the Wu-Tang. Anyways, I remember seeing the video for "Brooklyn Zoo" (the sweet version with the subtitles) on Bohemia Afterdark and that was all it took. It was simply one of the greatest rap songs I had ever heard. To this day it is one of the few rap tunes that I know ALL the words to. Some other sweet jams on this one are "Raw Hide," "Don't U Know," "Snakes," and "Protect Ya Neck II The Zoo."

I have a funny story about "Protect Ya Neck II The Zoo." It caused the only car accident I have ever been in. I used to drive a few friends to school every day. When the song finished on the way I couldn't wait to hear it again. So I rewound the tape and was too busy fiddling with the stereo to notice that the person in front of me had stopped. Long story short: I rearended them and my car became stuck to theirs. It was awesome because every person in my high school got to drive by and laugh at me.

This is one of the 6 classic Wu albums and if you don't own it then your life must be empty and lonely.