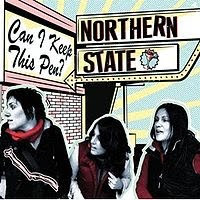 After revisiting the shit out of the first two Northern State albums, I decided - as I hinted at in my previous post - to pick up their third album, the only one I didn't have. Now I have it. And I'm glad I do.

I've only been listening to it for a few days, but I'm already of the opinion that it's their best one. While their first record found them still finding their sound, and their second seemed like it might have had a bit too much major-label interference, this one finds them jumping to Ipecac (Mike Patton's label) and sounding more confident, composed, and free than ever. There's more singing on this one, and that ends up being a great thing. The hooks on "Better Already" and "Good Distance" are mad infectious, and "Run Off the Road" is light, hazily melodic, and like nothing they ever tried before. A nice move.

Adrock produced two tracks here, the bumping "Oooh Girl" and the frantic "Sucka Mofo," which is arguably the best cut on the record. Adrock doesn't drop any rhymes, but you can hear him a little bit at the beginning of "Mofo." It's a shame, because he would have wrecked some serious bizness on that track, but what can you do.

I love records like this. While the group's first two albums were really good, I always got the vibe that they had a little bit more in them. This is the record where it all comes out. Rock that shit.