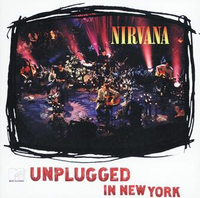 While In Utero was Nirvana's last album, this will always be considered their last hurrah, with Cobain's blood-curdling last yelp on "Where Did You Sleep Last Night?" continuously romanticized as his last public act. It is a striking image, and it's a nicer way to remember him than for how the remainder of his life played out. The MTV Unplugged performance is a great one, and as much as the act of doing it was very "corporate," the way Nirvana did it was admirable.

"Come As You Are" was the only single the band played (not counting "About a Girl," which was released as a single to coincide with the album's release), and of the other originals they played, there were some ones that obviously lent themselves to the acoustic arrangement of the show ("Polly," "Something in the Way," "Dumb") and a few that didn't ("On a Plain," "Pennyroyal Tea"). While the cover of the Vaselines' "Jesus Doesn't Want Me for a Sunbeam" wasn't too surprising, the Meat Puppets segment and the cover of David Bowie's "The Man Who Sold the World" were fairly random. Of course, it all worked.

When this first began airing on MTV, one of my friends taped it and we watched it repeatedly. Seeing the band play acoustic was just bizarre, but once we settled into that aspect of it, we quickly began to realize how great the performance was. Cobain looked healthy and happy, the band seemed rehearsed and genuinely pleased to be there, and most of all, the band who made their living being noisy as shit translated their songs perfectly to the stripped-down setting. If anyone doubted there were genuinely brilliant songs under the ragged guitar tones (not many did), they were proven wrong by this performance.

After Cobain's suicide, MTV played this thing into the ground and the tone of it instantly turned from easy enjoyment to sullen mourning. It wasn't hard: the flower arrangements made the whole think look like a funeral, and if you pay attention, you start to realize that almost every song in this set mentions death in one way or another.

I bought this record right around the time it came out, when I took a trip with some friends to Portland (from Eugene) to dick around and go record shopping. I have one of the first pressings on white vinyl and I've managed to hold onto it for all these years. I used to listen to it a lot, but I don't put it on nearly as much as I used to. It's a nice performance, but I've just heard it so many times. The record was good for two songs that didn't make it onto the initial broadcast: "Something in the Way" and an additional (and great) Meat Puppets song, "Oh Me."

This thing is worth checking out on DVD, too. I was going to write up a separate entry for it, but there's not too much to say that I couldn't say here. A few things are worth mentioning, though: the DVD includes the entire performance (between-song banter and all), as well as the originally aired version and a making-of doc that features some cool behind-the-scenes stuff.

Now if MTV would just put out a DVD of the Live and Loud show Nirvana did at the end of '93...
Posted by Wockenfuss at 1:26 AM

I remember anticipating the original airing of this thing (as I/you did with most things Nirvana) and wondering how they were going to pull it off. I watched at my girlfriend's house and was blown away by how great it was. I was also blown away by the inclusions of new covers that I had never seen them do, which was a pretty big deal. Pretty soon after a friend taped it off of TV and then I dubbed the video onto an audio cassette so I could listen to it all the time. "Jesus Don't Want Me For A Sunbeam" was also the first song I ever learned on the guitar (a friend taught it to me) and so there's that. I always really loved the Meat Puppets section and thought it was extra awesome that the actual Meat Puppets came to play with them. That was such a bizarre yet great call.