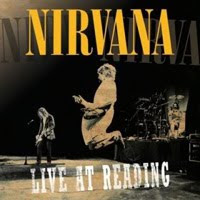 I already did a review of the DVD of this show, so I'm not sure what else I'm going to add to that. The album is, aside from the odd exclusion of "Love Buzz" (think they might have had to yank a song to keep the set under 80 minutes), the same set as the DVD, and it's equally powerful.

While it's probably a little more fun to watch the band playing the songs, this live recording sounds so good that it's worth having in addition to the film. While From the Muddy Banks of the Wishkah is a great live album, this one might win just for being one long, complete show, featuring the band at their peak. They sound so into it during this whole thing that I defy you not to get at least a little bit of a boner. Go ahead, try it.

The vinyl is a nice little set, with two thick-ass records that sound great, and a nice gatefold sleeve. A sweet addition to the collection. I said this in the entry for the DVD, but if you like Nirvana, you owe it to yourself to own this. It's blistering.