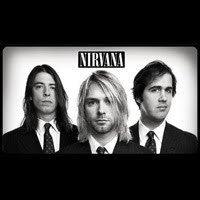 The talk about a Nirvana box set had been brewing for years, with rumors rampant about what it would (or wouldn't) contain. I was going to get it regardless, so I just hoped for the best. When it finally arrived under the Christmas tree for me in 2004, I was very excited.

In the months before its release, we finally got word that it was going to contain nothing but rarities, demos, home recordings, and other random ephemera. This was going to be my kind of box set. The Nirvana greatest hits comp (containing the anticlimactic "You Know You're Right") had been released a few years before, so there was no need to rehash the best of the band. It was time to go digging for the shit no one (not even the most ambitious bootleggers) had heard, and the folks who put this thing together did a great job. While it does contain some tracks that had seen release on various unauthorized comps ("Opinion," "If You Must," "Pen Cap Chew," among others), the majority of the stuff here was new to me, and some of it had been cleaned up for this release.

I was actually shocked that they released this thing, given what it contains. Most of this stuff is probably only of interest to the more obsessive Nirvana fan, and a lot of it is not as listenable as it is just a cool reference point as to where some of these songs started. The home demos with just Cobain and his out-of-tune acoustic are both creepy (voyeuristic much?) and endlessly interesting for people who wanted to know more about the guys songwriting process. I count myself among that group, so a lot of these tracks are really great for that. Two different versions of "Rape Me" right next to each other on Disc 3, recorded about a year and a half apart, do a great job of illustrating that song's growth in particular.

This set is also chronological, which is awesome. Not so awesome: some of the glaring mistakes in the titling and liner notes that should have been more thoroughly researched. Sure, only the harder-core Nirvana fans would probably notice this stuff, but songs here that had actual titles were given made-up ones, which is pretty lame. Also, there were a few songs that I had actually heard cleaner recordings of on bootleg versions ("Opinion" being one of them). This is nerd gripery, and I don't really like to go for that (or do I?), but I think it's worth mentioning.

The fourth disc, a DVD containing crazy-old rehearsal footage and other random stuff, is worth the price of admission alone. Again, it's probably more for the die-hard fan, but if that's you, you'll enjoy the shit out of it.

I've been listening to this thing for the last few days, and while it's great to rock, headphones-style while you're in front of the computer, it's not going to be the first thing you grab for a car ride. So, there's a time and a place. When the moment's right, strap on the phones and nerd out. That's what I do.