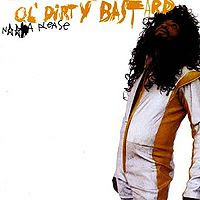 Wow. I want to find the dude who wrote the Wikipedia entry for this record and shake him. What a load. Nice try, ace.

So, here's the deal - and though I'm sure some folks will disagree with me, I'm just going to get right to it: this album really isn't very good. We want it to be good. Everyone wants to believe the myth of ODB (Big Baby Jesus, by this point), wants to believe that his genius remained intact until the day he died, but this record is full-on proof that the guy was a shell of his former self. If anyone deserves to be patted on the back for this one, it's the dude who spent months piecing together all of Dirty's nonsense and forming songs out of the random lines. Almost every single track here sounds like single lines cut-and-pasted together. Sometimes it kind of works; most of the time it doesn't.

This record actually starts out fairly strong. The first two tracks ("Recognize" and "I Can't Wait") are pretty good. From there, shit gets dicey. "Got Your Money" has one catchy-ass beat and chorus, but Dirty's rhymes are a mess. Tracks like "I Want Pussy" and "Dirt Dog" are borderline throwaways, and "Good Morning Heartache" is a complete throwaway.

The bright spots end up being the title track - on which RZA delivers a dope beat and Dirty sounds enthused - and "Gettin' High," mostly because Shorty Shit Stain (of "Protect Ya Neck II The Zoo" fame) is on it. But for the most part, I really think this album is overrated. And I hate The Neptunes. So that doesn't help. But tell me it doesn't sound like they propped Dirty up and just let him ramble until they had enough shit to cobble together and make songs out of.

Yes, there are some good songs on here. But it's not a great album. We would like it to be. But it's not. Especially coming after his debut.

"Got Your Money"
Posted by Wockenfuss at 2:05 AM

That Wikipedia entry is embarrassing. I remember reading a really great article about this album around the time that it came out. It was all about the sheer mayhem that took place while recording the record. You are spot on with the assessment that it was pretty pieced together. The Neptunes (who weren't famous as of yet) would play the beat and record Ol' Dirty freestyling. They would do this over and over again and then go back and basically piece together his vocal performance. They also said that you can hear sex sounds (Jim Morrison style) in certain songs if you listen hard enough. I have yet to hear them.

The shame with this album is that Dirty was too far gone to write some rhymes. Most of the beats are pretty good (I hate to say that because I hate The Neptunes as well) but Dirty doesn't rise to the occasion on every one. That being said, "Got Your Money," "Rollin Wit You," "Gettin High" (which Dirty isn't even on), and "I Can't Wait" are all pretty sweet songs. It isn't the crowning achievement that some people want it to be but its still a pretty fun record to listen to. And "Cracker Jack" is a pretty out there song, even for ODB.