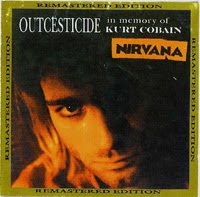 I almost forgot I had this. But I do. So, as an afterthought to all the legit Nirvana albums we covered, here's a bootleg that I've owned for a long-ass time.

Before the box set but after Incesticide, there were still a bunch of non-album Nirvana tracks that were floating around. This disc contains (arguably) the most notable of those, though almost all of this stuff would indeed end up on the With the Lights Out box years later, with some having been given different names. I also think there are a few cuts on here that are different versions of songs that ended up on the box. For example, "Junkyard" on here is a live version of the song listed on the box set as "Token Eastern Song," and the version there is a studio demo. If that makes sense.

There is a really weird version of "D-7" on here that I can't really figure out the origins of, but it's more of an oddity than anything. There's also the version of "Breed" when it was still called "Imodium" that's pretty sweet. So, yeah, some random stuff. And it was really cool to have this before the box set came out, and it's still cool to have. It's more or less the kind of "Unreleased Nirvana" mix I would have made myself. And I guess that's why I still have it.

"Imodium"
Posted by Wockenfuss at 9:35 PM