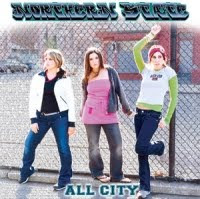 For their second release, the Northern Staters hooked up with some big-time hip hop producers (Muggs, ?uestlove, Pete Rock) and got some guest spots going (The High and Mighty, Har Mar Superstar). Their rhyme style got a little more fluid, and the beats got - obviously - a little more slick. I haven't listened to this album in a few years, but it's coming back a little bit.

The song structures are similar to the first record, and anyone who didn't like that one isn't going to like this one. The hooks here are a little less organic, but whatever. This record definitely feels a little more "major label" than their first (because it is), and I think that takes a tiny bit of the charm away, but it's not like this thing's all polished and shiny. And the lyrics are still there. Wish I had more to say about it, but I really haven't rocked this in a while.

They went on to put out another record after this one (on Ipecac, of all labels), but I never picked that one up. Not sure why. I may do that. I've got the first two, might as well complete the trilogy.

"Girl for All Seasons"
Posted by Wockenfuss at 12:25 AM

Full disclosure: I got a promo of this when I worked for my college paper. What I mean is that I never would have bought this. The first one was enough for me. That being said, this one has never really done it for me. I think them hooking up with more "legitimate" producers kind of took something away. I don't want to hear three average rapper girls rocking over a Muggs beat. Because I never thought their intention was to claim that they were "real hip hop" (whatever that is) but this album seems to try to prove they are. I don't really know what I am saying.

Basically, the beats are boring and the rhymes got a little better. Yeah.

They went on to Ipecac? That makes no sense to me.