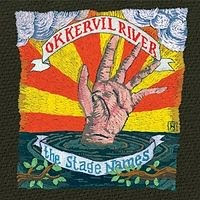 I don't usually put much stock in Pitchfork reviews, but they gave this album such a hand job that I, after reading the article and determining that it sounded like something I might like, had to hear it. So I found a site that was streaming the entire album to promote its release (it might have been their MySpace page), and after listening to it for days straight and driving my future wife nuts, I decided it was worth picking up. I found a used copy, listened to it even more, and drove my wife even further into Okkervil madness. I still remember her whining when the first few bars of "Our Life Is Not a Movie or Maybe" would come on. Memories.

So, anyway, this record was my introduction to the group, and I was really excited to find some new music to listen to. So much so that played this one into the ground, bought their two previous records (we already talked about that), and proceeded to get completely burnt out on all of it. I've since taken a long enough break that I can listen to this album in particular and remember what I initially loved about it so much.

If the group hadn't already found their sound - and I think they had - they definitely found it on this group of songs. There are only nine tracks here, but they're all good, all completely fleshed out, and all complementary to the songs that precede and follow them. That's the sign of a great record, and something that I think gets lost a lot these days. I love this record because I never have any desire to do anything with it but straight up front-to-back it. It's got a striking beginning, a huge ending, and a bunch of cool shit in between. That's waaay oversimplifying it, but you get the idea. The songs are good, the execution is appropriate given the material, and there's no space wasted.

I'm always hesitant to recommend this to people (I'm still pretty sure my wife doesn't care for it), but what the hell. It's your life. Live it. Of course, I still haven't purchased their new LP, so who the heck am I to tell anyone what to do?

"Our Life Is Not a Movie or Maybe"
Posted by Wockenfuss at 1:46 AM