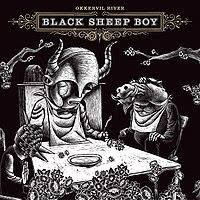 While I like Down the River of Golden Dreams quite a bit, this record is even better, and over time, I've grown to like it almost as much as The Stage Names. In fact, this record sounds like Part One of that album, in a way. While the production is a little different, the songwriting is strikingly similar, and you can tell the band has found their sweet spot.

"For Real" starts out in their standard timid fashion, but soon blows open and turns into a legitimately powerful track, while still remaining comfortably ragged. "Black" is another romper, and one of the band's catchiest songs. It made me realize that while I certainly enjoy their fragile stuff, I like it when they really get the strum going, too. Will Sheff's got a more versatile voice than he lets on, and this record really give him a chance to use it.

Tracks like the slow and frail "In a Radio Song" and the eight-minute "So Come Back, I Am Waiting" might be a little much for some people, but I think they move just enough to be really effective at what they're trying to do. And that can be said for this whole record. It's jam-packed with peaks and valleys, but the sequencing is smart and the songs are strong. That's all you need.