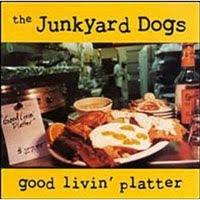 In the pre-internet days of the early 90's, it was tough to find out if your favorite semi-obscure band was putting a side project together. If The Rocket didn't report it, there was little chance of knowing it was going on unless you really had your ear to the streets. I was 17 in 1993, and though I was a huge fan of local (NW) music, I certainly wasn't juiced into the rumor mill.

As I've mentioned here and here, I'm a huge fan of the Supersuckers. By 1993, they had released a handful of 7"s, a CD compilation of those singles plus some bonus tracks, and their first proper full-length. I was always jonesin' for more, and as I said, info on album release dates from bands who weren't being written up in the major mags of the day were hard to come by. So, when you were at the record store, you just religiously checked the band's section.

I would often head to Portland (from Salem, where I grew up) to go record shopping once I had transportation. My girlfriend and I (looking back, she was a sport) would make a weekend day of it, hitting the Saturday Market and then record shopping for the rest of the afternoon. 2nd Avenue Records was always THE spot to go. It's still a great place, but for some reason, I remember their old location being heaven. It was tiny and just packed with everything I wanted. Money was tight, so I had to choose wisely. That's a whole 'nother story. Anyway, I was there one day, doing my routine check of the Supersuckers section (vinyl, of course), and there was a 10" record tucked in with the stuff I expected to see. It was The Junkyard Dogs, and it had a hand-written sticker on it that said something like "Members of the Supersuckers."

I was excited, but wary. I flipped it over, and there was a blurry photo of a dude with an acoustic strapped to his person. It looked like Eddie (Spaghetti, lead Supersuckers dude). The alias "Eddie Cheddar" wasn't too hard to decode, so I knew it was legit. I picked it up and couldn't wait to get it home and hear what this was all about.

At the time, the Supersuckers were an unbending rock band. They had dabbled with an acoustic on a random b-side, but it was a one-off goof. So when I put this on and heard harmonicas and slide guitars, I was taken aback. But, I was willing to go down any avenue the band would drag me, so I was more intrigued than anything. I learned to love this record real quick, and I still do. I had no idea it would be the beginning of their (mostly) serious foray into "country" music, but it was clear they were enjoying showing this side of themselves.

I'm still not sure exactly who plays on this record. While Eddie's alias is fairly straightforward, the others aren't. "Marko Armani" is most likely Mark Arm, but other than that, I'm not sure who's doing what. There's nine players listed and a bunch of back-up singers, and they all have wacky names. I'd love to know for the record, but I've never dug too deep trying to figure it out.

The music is recorded roughly, but the songs are great. There are two originals and six covers, with the originals being tongue-in-cheek country fun and the covers being country versions of rock and metal songs. Judas Priest's "Breaking the Law" is probably the most well-known of the bunch, and their slowed-down take on it is sweet. Other than the originals, the highlight is probably the Gories' "View From Here." Nice backup vocals and it's a super-catchy song.

They also take on the Dwarves ("Drug Store"), the Fall Outs ("Ambition"), Dion ("Born to Cry"), and Devo ("Gates of Steel"). In an odd move, they released a CD version of this with 4 extra tracks. Why they didn't just put it out on 12" vinyl I will never know. I actually finally ordered the CD version (don't ask me why I waited 15 years), and I'm waiting for it to show up. That is going to be sweet.

The Supersuckers still play "Good Livin" when they do their country set. I feel like I saw them do "Unwanted Man" (the other original on this) like 10 years ago, but I think I'm imagining that. Wow, I wrote way too much about this. Wait till we get to the actual Supersuckers records. It's going to be a tome.

"View From Here"
Posted by Wockenfuss at 1:06 AM

I can't wait to hear those CD only songs. They will be like a long lost time capsule. I'll never understand the 10 inch release when the release ain't an LP. It don't make no sense.