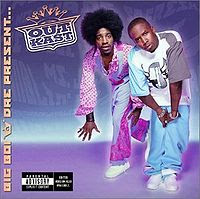 Outkast blew the heck up after Stankonia dropped, so in a rare move in the hip hop world, they dropped a Christmastime greatest hits comp in hopes to capitalize on some of that success. Of course, they put a small handful of new tracks on it too, so the hardcore fans had a reason to pick it up. The whole thing reeked of cash-grab to me, and I don't think I even bought this until a few years ago, when I found it used at a very discount price.

Still, the non-album tracks (there are four, counting the intro) are good cuts, and they're worth owning. "Funkin' Around" sounds very of-the-time, with Dre copping a fake British accent and then busting in with some forceful rhymes. Big Boi, of course, slays shit on his verse. "The Whole World" was a modest hit for them around this time, and it should have been bigger. It's got a huge hook, and the raps on it are dope. "Movin' Cool" isn't big on raps, but it makes a nice outro to this collection. Sort of a soul-funk type thing, with Big Boi dropping some knowledge towards the end.

This collection also features lyrics for all the tracks in the liner notes, and that's pretty cool. There's also a decent recap of their four studio albums.

The ads for the short-lived Outkast clothing line.

The ads for André's artwork, which has "SAMPLE" stamped all over the one-inch-square photos. Yeah, you don't want anyone scanning that and putting it in their wallet.

The especially hacky-looking ad for Big Boi's pit bull kennel business. His own name is misspelled in it.

They should have included the weird-as-shit "Land of a Million Drums" on it, but instead it went straight to the Scooby-Doo soundtrack a year later.

The tracks aren't in chronological order, and there's only two songs from ATLiens.

I can always find stuff to whine about.

"The Whole World"
Posted by Wockenfuss at 11:18 PM

I have never heard this. I wish my brother would put these songs on a CD for me. I wish...