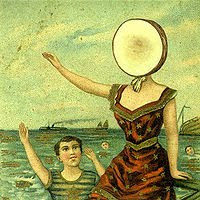 After reading the praises of this album for almost a decade, I decided to pick it up a few years back. And when I say "praises," I mean rock critics declaring it one of the greatest albums of the last twenty years. So maybe I went into it with high expectations, or maybe I was too far removed from the time frame when it was originally released.

Either way, though I can see the appeal of this record, I guess I just don't get why so many folks are unbending in their desire to cup its balls. It's great lo-fi rock, and the songs are certainly solid. Why it has become one of the most heralded albums in the history of indie rock, I might never understand. Clearly it has affected some folks tremendously, but I've also come to the understanding that's it's quite divisive in its appeal. And while I certainly don't think it sucks, I don't find it good for much more than a casual listen every once in a while.

If someone wants to break down its genius for me, I'm all ears. Until then, I'm content with thinking that it's a fine record. And there's nothing wrong with that.

"Two-Headed Boy"
Posted by Wockenfuss at 1:34 AM