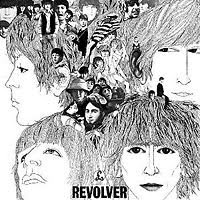 If anybody wants to punch me in the back of the head for not owning a proper copy of Rubber Soul, feel free. I will take it like a man. Don't bother with fair warning. Just lay into me. I deserve it.

When it comes to narrowing down the Beatles catalog to their finest slab of wax (impossible, but it is a wonderful conversation to have), there are viable arguments to be made for nearly every post-Rubber Soul album (you rarely encounter people flush with vigor over Yellow Submarine). But, more often than not, at least in printed publications, it comes down to Sgt. Pepper's or Revolver. This argument often carries over into which is not only the best Beatles album, but which is the best album. Ever. Whichever side you're on (although being unbending and adamant about either is annoying), at least we can agree that this is one of the most important albums ever recorded.

When you listen to it, there's nothing that would indicate otherwise. This is, not surprisingly, another Beatles album that is years ahead of its time. I can't imagine what it must have been like to hear "Tomorrow Never Knows" for the first time in '66. It's ambitious as shit now. And, it offers further proof that, between the years 1965 and 1969, John Lennon was one of the coolest guys on the planet. Need more convincing? Of course not, but indulge me: Listen to "I'm Only Sleeping," three of the most untouchable minutes in the entirety of The Beatles, not to mention 60's rock.

This is, of course, not meant to exclude McCartney from the groupe de cool. If there's one thing wrong with "For No One" (and there's not), it's that it's a minute too short. "Good Day Sunshine" might tip the scales as a bit too happy-go-lucky, but the uncharacteristically dour nature of "Eleanor Rigby" more than evens it out. Additionally, "Here, There, and Everywhere" is an oft-overlooked McCartney standout.

I could sit here and praise this record all day. It's Revolver, for chrissake. You know the drill.

One final thing: "Taxman" is a stellar opener, written, of course, by George Harrison. Then ol' George manages to slip not one, but TWO more original compositions in before it all plays out. Nice work, Georgie boy.

Your Beatles "collection" is embarrassing. What kind of man are you? Their early catalog is extremely underrated (what I mean is it is not just "I Want To Hold Your Hand" type stuff) and no "Rubber Soul?" The American version of "Help?" What the hey is wrong with you? I have no problem saying that I am one of those annoying people who is convinced that this is their best record. "I'm Only Sleeping" makes me want to weep. Get at me.