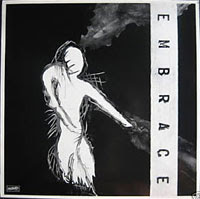 Ian MacKaye takes umbrage with those who refer to this record and this band (which really isn't much more than a one-off side project) as "emocore." It's easy to understand his frustration, mostly because the dude's not a fan of labels of any sort. But, come on. Lines like "I hid my feelings/ When they should've been bared" are pure fodder for people who want to point to this record as one of the first "emo" albums.

Really, none of that shit matters. Yes, MacKaye does talk about his "feelings" more on this album than any other one, and yes, coming shortly after Minor Threat, it seems just that much more sensitive. I've always viewed it more as a catharsis. These are songs that don't seem completely fleshed out, but they serve a purpose as vehicles for MacKaye to vent his current frustrations. Nothing wrong with that. And, this is one of the bridges between Minor Threat and Fugazi. His lyrics, as introverted as they may be, are more structured and wisely political than they were with the Threat. He still doesn't quite have the hang of it, but he's real close.

The songs on this record aren't super memorable, but they're far from bad. And as unpolished as they are, they're not thrown together, either. MacKaye has specific targets on each track, and he does a good job of screaming in the faces of the people he's pissed at.

I don't listen to this record much anymore, but I'll never get rid of it. It's a great semi-oddity in the MacKaye/Dischord catalog. Listening to it now, I'm remembering what I liked about it: the recording is raw, the songs are hard and fast, and just to let you know he hasn't gone soft, MacKaye drops lines like "Sometimes I'd like to kick your fuckin' ass."

"Dance of Days"
Posted by Wockenfuss at 1:19 AM