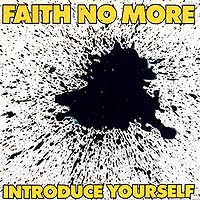 When Faith No More's The Real Thing was hot shit in 1990, we (me, my brother, all our friends) just couldn't get enough of it. (More about that in the next entry.) I distinctly remember my friend telling me he had purchased their previous effort, and before I could get too excited, he dropped the bomb: "Dude, I think they different singer." As 13-year-olds, this made little sense to us, but once you heard the songs, there was no doubt. Mike Patton, the main reason we all worshiped this band, was clearly not the guy stumble-mumbling through these tunes. The music sounded just the same, but the dude singing was clearly an acquired taste. We had no trouble understanding why they wouldn't want him in the band.

20 years later, I still understand why they didn't want him in the band. I can see why some people can get into the Chuck Mosely-era FNM, but it was never for me. I think the title track is fine, but I still prefer to hear Patton perform it, which he did live on many occasions. They did a few others from this record live with Patton in the years that followed, as well, which may be a testament to the following that this album must have had somewhere.

I just never had the patience for it. Chuck always struck me as a one-trick pony, and a juvenile one at that. Patton was also juvenile, but he was a much better singer.

Yet I still own this on CD and LP. Go figure.

Wow, I am one that loves this record probably way too much. I think that I can still sing every single lyric to this. The Chuck years are definitely different, but the first two albums I find to be on par with the post-Chuck albums. Also, I may just be quite blinded by my undying affection for FNM. Still, "Crab Song," "R 'n' R," "Chinese Arithmetic," and "Spirit" are all songs that I can't imagine living without. Do I love these Chuck albums? Yes. Am I glad that Patton replaced him? But of course. So that's that.