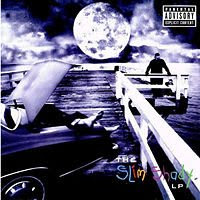 I remember seeing the article in Rolling Stone. Dr. Dre was sitting in the studio, bro-handshaking with this peroxide blonde weasely looking dude, and the article explained that the kid was Dre's new protégé. I did not have high hopes. When I saw the video for "My Name Is," it confirmed my worst fears: Dre was pandering to the white kids, looking to sell this poor sap down the river to make a few bucks. I also noticed that the sap's rhymes, while pretty stupid with the subject matter, were pretty smart with the execution.

I heard Eminem again when I was hanging out with some friends before we went out one night. They had this CD on and it played through once while we were sitting around. After hearing some of the deeper album cuts, my intrigue grew. I picked up a used cassette copy and gave it some time in the car. Some of it immediately struck me as over-the-top corny. I was still in my early twenties when this album came out, and I felt I was too old to be listening to it. It seemed dead-set on aiming straight for the ears of teenage boys. It was, but once I decided not to give a shit about that, I learned to like this record.

I'm probably like a lot of other people: if I never heard "My Name Is" or "Guilty Conscience" ever again, I'd be fine with that. But, tracks like "Bad Meets Evil," "If I Had," and "Rock Bottom" still sound great to me. And there's more than that. This album is deep, almost an hour long, and it's filled to the brim. Em's lyrics are great throughout, and you can tell this is stuff he'd been working on for years.

Is is the most mature album in the world? Nope. Is it borderline retarded in spots? Yep. Are these some sweet lines?

I remember seeing Eminem's mom (and his mortified little brother) on an episode of Sally Jessy a few years after this came out, when people were really on his shit about the content of his lyrics. A teenage kid stood up to defend his hero Slim Shady, and when Sally asked him why he liked to listen to such offensive music, the kid said, "I just like the way he rhymes."

That's what I'm talking about.