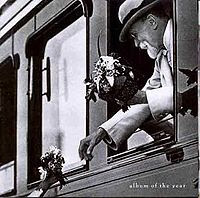 I think we may have known it was going to end here.

The band was notorious for not getting along, and after using Trey Spruance to record King for a Day..., Dean Menta to tour on it, and then replacing him with Jon Hudson for this record, the whole thing was looking a bit shaky. It was strange, but even though they continued to make good music, none of the guitarists seemed to really fit the band. (Though Spruance's contributions to King for a Day... were legendary, he refused to tour. Menta, in my opinion, was spotty at best. Hearing him playing some of Jim Martin's solos from the early stuff was cringe-inducing. Not that I really know what I'm talking about (technically, at least), but he lacked the finesse and precision that Martin brought to the band. (Watch the "Ricochet" video I linked to on my previous post. Menta comes in too early and you can see Patton give Gould a look that sums it all up perfectly.)

So, when Hudson was added to the band, I don't remember us thinking it odd, or even caring. We figured Patton and Gould were just telling him what to play, and the dude was probably just happy to be there. That's pretty much how it seemed when we saw him live. He wasn't flashy, stayed well withing the boundaries of the songs, and was just fine as a guitar player. He seemed to be a step up from Menta, but he never seemed like The Guitarist from Faith No More. He seemed like The Dude Who's Playing Guitar in Faith No More Right Now. If that makes sense. Anyway, why was I saying this? Oh, it all added to the sense that the band was drawing to a close. I personally wondered how long their label would keep them around without a radio hit. But, they were always big in foreign countries...

Regardless, we were happy as shit that they were putting out at least one more record. I was tipped off to this one, again, by a music video. MTV's "120 Minutes" ran the clip for "Last Cup of Sorrow," and though you never knew what you were going to get with their videos, I don't think anyone could have anticipated a Vertigo homage starring Jennifer Jason Leigh. The release date was just a few weeks away. By this time, I was living in Eugene, surrounded by a small group of fellow FNM fans. We bought the disc when it came out, and didn't stop playing it for the rest of the year.

You could make an argument for this record not being the band's strongest work, but you couldn't make a more idiotic series of points than the ones contained in the review Rolling Stone printed the same week the album dropped. Oh, how that made me angry for so many reasons. Of course, it was uninformed rubes like this who made being a "real" fan of this band even sweeter.

I still insist they went out on a high note.

"Collision" - Like any good opener on a Faith No More record, this song wastes no time getting right into the meaty part of it. Seeing them play this song live, hearing Patton wail out that chorus; it was really something to witness. This track is giant.

"Stripsearch" - I was obsessed with this song for a long time. The verses in this one are untouchable. It also doesn't really have a discernible chorus, which I think is fantastic. I used to know what "F for fake" referred to, but now I can't remember. This track is also notable for having the most strangely awesome video in the history of the band's catalog.

"Last Cup of Sorrow" - This is a great song, but like the other singles that would lead off their albums, I've just heard it too many times. Still like it, but I may have skipped past it a time or two to get to the fantastic shit that follows it.

"Naked in Front of the Computer" - This was still before the internet had really taken over the world, but it seemed Patton could see what was coming. Yep, I've elevated him to prophet status now. Surprised? Nah, you're not. This is the first song in which he gets nutso screamy on this record and it is fucking sweet.

"Helpless" - This is my favorite song on this album. There are a few other competitors, but I think this one would take the title. It's got the best lyrics, acoustic guitar (!), and every element falls perfectly into place. It also houses my favorite lines on the whole record: "I even tried to get arrested today/ But everyone looked the other way." Oh, that's good.

"Mouth to Mouth" - A very odd song, and I go back and forth with this one. I wasn't a fan at first, which was weird. Of course, I've learned to appreciate it over the years. Always wondered what it was about.

"Ashes to Ashes" - Wikipedia has this song listed as the first single from this album, but that's not how I remember it at all. Either way, it's a strong song, though paced slowly and much better live than it ever was in this version.

"She Loves Me Not" - As soft and sultry as the band ever got, and I ate it up. I still do. This is the only FNM song your girlfriend is guaranteed to like. Just so you know he hasn't gone completely off the lovesick deep end, Patton throws in "You'll be on your knees." Brilliant.

"Got That Feeling" - A great soundtrack to my roommates video poker addiction at the time this was released. A lot like "Naked in Front of the Computer," which makes sense, because they were both Patton compositions. I always thought the "You can't borrow tomorrow" line at the end was a little heavy-handed, but what can you do.

"Paths of Glory" - This track may hold the distinction of being the all-time most forgettable FNM song. It's not bad, but (and I can't believe I'm saying this) it's not great. It's also tucked away towards the end of this record, and sometimes just seems like it slips by.

"Home Sick Home" - A great song because it's not even two minutes long, and they get a lot done in that short span. Drag it out for four, I'm not sure it would work.

"Pristina" - There would never be a perfect last song for the last Faith No More record, but this one's as close as they could get (not including King for Day's "Just a Man," which would have been a little bit closer). This song is odd at the beginning, crashing in and out as Patton morphs his voice and creeps all over it. When he finally breaks in with the rest of the band and wails out "I'll be with you," it's big time. The song fades out with Patton half-whispering "I'm watching you..." and then it's over. Looks corny on paper but it's flat-out fantastic.

We knew it was going to be hard for them to follow the brilliance of King for a Day.... Considering what they were up against, I'd say they did a damn fine job.

"Pristina"
Posted by Wockenfuss at 4:03 AM

I think somehow I knew when this came out that this would be their last album. I can't remember if it was fact or just something one could tell. This came out on the very same day as Wu-Tang Forever as I remember my friend JJ and I skipped school to buy both and then sat in the garage and listened to both all day. It was an overwhelming day to be sure. I remember thinking then, and still do now, that this one, although great, felt a little by the numbers. Each side kind of has the same amount of genres thrown in (the buttrockers, the ballads, the radio songs, etc...) and, although I enjoy all the songs here, it seems that some sort of urgency or passion has left. Maybe Jon Hudson is just a boring guitar player. Who knows? That being said, I am comparing it against their other records which are all pretty perfect to me. Compared to most other albums, this album rules. And also, had that Rolling Stone reviewer missed the two albums in between? Pretty bush league for Rolling Stone.