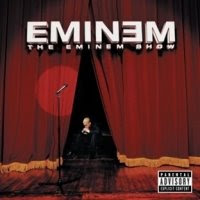 Sometimes, when you've got a bunch of people around you telling you you're a genius (or possibly the "voice of a generation"), you really start to believe it. You start to feel it's your duty to quit fucking around and drop some real knowledge on these goddamned sheep.

Eminem's strong suit had always been the "just don't give a fuck" of his Slim Shady persona, a dude who'll say anything just to get a rise out of you, and if you're not on board with him, who gives a shit. He was kidding anyway. I don't know about the teenagers, but I was never looking to Eminem for advice on who to vote for, or to hold up a mirror to our damaged society. To me, his music was always a great way to not think about that shit.

So, the first time I heard "White America," the opening track on this, his third proper full-length, I was disappointed. It's five and half minutes of Em trying to be Chuck D and Flavor Flav at the same time, and it's incredibly boring and pompous. Pretension from a guy like this is disheartening for so many different reasons. When I got to "Sing for the Moment," which is not much more than him rapping over a re-playing of Aerosmith's "Dream On," my disappointment grew. Not only is it tired (come on, jacking fucking Aerosmith?), but it's the first of three almost-six-minute songs in a row, and you start to feel like he's really towing that blowhard line.

Having said all that, I love about half of this record. "Soldier" is one of my all-time favorite Eminem songs, and "Business" and "Till I Collapse" are dope as shit. I guess I always think of this record as the beginning of Eminem shoving his sense of humor aside in favor of those dumb biker gloves he started wearing. Flexing hard is one thing; taking yourself far to seriously is another.

Yep, I'm totally one of those "I liked his old shit better" guys.

"Cleanin' Out My Closet"
Posted by Wockenfuss at 2:38 AM

Wow. How did you leave out "Say Goodbye To Hollywood," which is probably my second favorite tune of his (after "Marshall Mathers")? Are you pro or con? Its funny, I thought the exact thing the first time I heard "White America," it was utter confusion followed by boredom followed by the skip button about 4:30 of the way through. And that Aerosmith song is straight embarrassing.

Oh yeah, I forgot to mention "Hollywood." Definitely one of the better tracks on this one.

But hey, that Aerosmith song is cool because he got Joe Perry to play on it, right?