Stallion Alert at the Movies: Get Thrashed: The Story of Thrash Metal (2006) 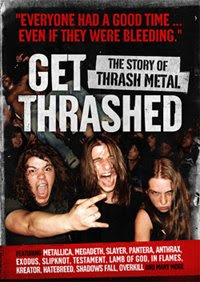 This is a new feature idea I'm trying out for the site. And since I rarely get comments (aside from the fairly reliable Biff), I didn't figure anyone would protest. I watch documentaries about music every once in a while, and I thought it might be nice to write 'em up here. This is the first one.

I should preface this by stating what is already obvious if you've looked through the archives of this blog at all: I'm not a thrash metal fan. But, I do like documentaries about metal, and through listening to at least a little bit of thrash metal every day at my job, I've learned to appreciate its finer points. It's just not really my thing. But really, who doesn't love watching live footage of Slayer or Megadeth? There's something utterly fascinating about the whole experience. And Dave Mustaine gives great interviews.

I'm getting ahead of myself. This movie sets out to tell the story of the rise and fall (and eventual mild resurgence) of thrash metal, and they do a great job of it. There aren't a ton of metal documentaries out there, and the ones that do exist often don't take the time to get too in-depth. Heavy: The Story of Metal is a great example. It's fine for a brief overview, but to really tell the entire story of the genre would warrant a film at least three days long. By picking a specific subgenre under the metal umbrella, specifically one that only seriously thrived for a short time period, they're able to get into the bands and music here a lot more than other movies.

The editing is great, there is some sweet bootleg-quality vintage live footage, and there's a ton of photos and show flyers that they had to have acquired from people who were really living it at the time. So, that was my first clue that this wasn't some thrown-together documentary. The other clue (and I didn't get this until the end of the flick) was that it was put together by Rat Skates, one of the original guitar players in the seminal thrash band Overkill. So, dude knows what he's talking about.

The film was paced well, starting at the beginning and working its way through the slight transformations of the music and the surges in popularity, all with the aid of minimal narration, opting instead for interviews with people who were there. The thing that made me the happiest: this is not just a film about Metallica. Though they are talked about quite a bit during the course of the film, a lot of the people they interview seem much happier to talk about some of the more "underground" (and really, more interesting) bands, like Kreator, Sodom, Vio-lence, Nuclear Assualt, etc.

The bonus features carry this a step further, using a world map as navigation and talking about notable bands that came from each region, and all the ones that weren't given their own mini-features in the actual film. It ends up being almost a complete additional movie to watch.

I found it to be really interesting, and like I said, I don't actively listen to the music. But I do actively enjoy watching metal nerds nerd out on their favorite metal bands and talking about how things "fucking rule." If you are into that, this is worth tossing in the ol' Netflix queue.

You can watch the trailer here.
Posted by Wockenfuss at 12:26 AM