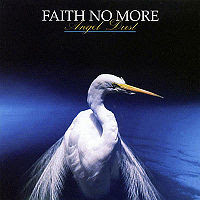 In the few years that followed the release of The Real Thing, the landscape of popular music changed drastically. We were all curious to see how Faith No More would choose to navigate this new terrain. We knew one thing, even if we didn't admit it outright: if they came back with an album that sounded anything like a sequel to The Real Thing, they weren't going to make it.

We had hope. Recent Patton sightings confirmed a change, at least in the looks department. His flashy getups were taking a backseat to more ragtag ensembles, and it looked like he had put his hair in a ponytail and chopped off whatever hung out of the rubber band with a pair of dull scissors. Either he was going crazier, or he was ready to shed his pretty-boy image. The day I saw the "Midlife Crisis" video premier on MTV, it became crystal clear: the "Epic"-era Faith No More was no longer. Patton had a goatee, and there seemed to be an eyebrow ring under his crumpled baseball cap. Best of all, the song was fantastic.

We copped the cassette right quick and prepared to usher in the new-and-improved FNM.

"Land of Sunshine" - If I make it seem like the band sounded nothing like they did before, I'm afraid that's misleading. This song is a good example of how they kept a lot of the core elements of their sound, but just pushed them harder, made them heavier, and added more intricacies. Patton sets the tone for the rest of the album perfectly on this track, talking, singing, screaming, and covering all the ground in between. I can't start gushing, because I love every song on this record. So yes, I love this song.

"Caffeine" - This was an early front-runner for our favorite song on the record. That may have been because we hadn't even listened to the whole tape before we started rewinding this song over and over. It really is that good. If I started a religion, it might be based loosely on this performance of "Caffeine."

"Midlife Crisis" - As I said, the first single, and probably one of the more "accessible" songs on the record. I've never grown completely sick of this song, but it's not one of the ones I'll skip to much anymore. I still think the "Your menstruating heart/ It ain't bleeding enough for two" line is fucking gold.

"RV" - The first time I heard this song, I was a little confused. Then I learned to love it. It's sort of a potent little character sketch, and though it would have looked terrible on the drawing board, I think it works perfectly.

"Smaller and Smaller" - The first of the real hard-riffing, jaggedly abrasive songs on the record, and one that I feel sometimes get lost in the middle of this record. This is one I'll never get tired of.

"Everything's Ruined" - If I had to pick my favorite song from this record, this would be an early favorite before I eventually started crying from my brain imploding with the sheer impact of that question. Patton's melody/lyrics combo on this song continue to blow my mind. "We were like ink and paper/ Numbers on the calculator/ Knew arithmetic so well." That is good stuff. If anyone has any theories as to what this song is about, I'd love to hear 'em.

"Malpractice" - Let's get nuts. Mr. Bungle (Patton's other band; like I have to tell you that) released a song a year or two before this called "Slowly Growing Deaf." I feel like this is the Faith No More counterpart, a song about Patton's apparent inability to cope with being on stage all the time. This song would kill you if it could.

"Kindergarten" - This song starts side two of the cassette of "Angel Dust," and I know that because I think I still keep a copy in my car. This is another character sketch sort of thing, though it's much heavier and a little less direct than "RV." Billy Gould has some rolling-ass bass lines on this one.

"A Small Victory" - This was the second single from the record, and it has to be FNM's most expensive video ever. In a perfect world, this song would have been a huge hit. It's catchy as shit, and it's about the only song on this album where Patton starts to slip back into his nasally vocal style. Yep, you guessed it: a great song.

"Crack Hitler" - This track would challenge "Everything's Ruined" for my favorite song on Angel Dust, and it would give it a good run. More lyrics that I've always treasured: "Sink the eight ball/ Buy the lady a drink/ And nobody knows my name/ Bodies float up/ From the bottom of the river/ Like bubbles in fine champagne." Oh how I like it so much.

"Jizzlobber" - You wanna get really nuts? I've always thought it was a bit of a shame that they tucked this track away, leaving it to dwell in the less-than-ideal penultimate slot on the record. Patton goes absolutely fucking crazy on this song, and so does the rest of the band. Brilliant. (Sweet bootleg video here.)

"Midnight Cowboy" - An instrumental that was fun to see them play live, but I can't remember the last time I sat through this song. It's a nice cool-down after "Jizzlobber," I guess.

And there you have it. And if you don't have it (this album), you're missing out on some of the best rock the world has to offer.

"Everything's Ruined"
Posted by Wockenfuss at 4:22 AM

I don't even know what to say about this one. I was firmly obsessed with FNM by the time this came out. I mean my bedroom door was covered in FNM postcards and pictures and crap like that. I remember being blown away by just how good this was. I didn't know what to expect for a follow up. I certainly didn't expect it to outdo "The Real Thing," but for my 13 year old money it certainly did. And still does. Not even a hint of a clunker (except for "Midnight Cowboy" which I forget is on there in the first place) and every song could be the best song on the record. I remember thinking that "Caffeine" was the most powerful song I had ever heard at that point. So many memories with this record I don't even know where to begin. I'll just leave it at this is easily my second most listened to record of all time. Oh, and true story: "Be Aggressive" was the theme song for my 13-year-old Babe Ruth team. So right and yet so wrong.