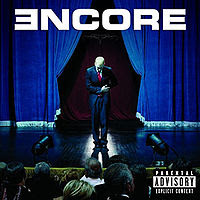 If Eminem's last record was him trying to get serious for a minute, this one seems like he's given up on that idea and just gone crazy instead.

"Evil Deeds" is a slight return to form as an opener, a song that is at least peppy, and while he might be trying to be playful with it, it almost sounds like a strange cry for help. It seems Eminem had almost been warped by the insular nature of his fame-crazed life, and this song sounds like he's both off his rocker and, strange as it may seems, Eminem trying to sound like Eminem. The rest of the record is pretty much the same. "Mosh" is another serious song, and it's terrible. People who try to act like this song is deep are easily stimulated, apparently. It's followed by "Puke," which is just as low-brow as it sounds.

Even the radio single from this album sounds like Eminem parodying himself. I wonder if he really thought the yelping thing (that sounds vaguely Pee-Wee Herman) from "Just Lose It" was going to catch on, or if he just wanted to see if all of us would start doing it?

Like his previous effort, there's also some great songs on here, but they're getting fewer and farther between. I understand Eminem's got the world on his shoulders and all, but come on, man, we all miss you being nutty.

Now it's all doo rags and those damn biker gloves.