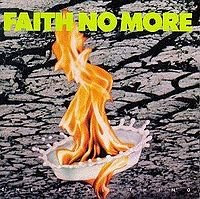 Wow, where to even start with this one.

Faith No More, the Patton Years, begins here. We had no idea where it would take us, and we didn't care. When MTV started airing the now-famous video for "Epic" sometime in 1990, we (again: me, my brother, a few of my close friends with discerning tastes) were hooked instantly. This was music like we'd never heard before. The slapping bass, the rap-ish vocals combined with huge choruses; it all equaled awesome. I know my brother had a dubbed cassette of this album that was on a loop in our house for the good portion of that entire year, and for good reason: this record is fantastic. Sure, it gives us a small window into FNM's butt rawk dalliances (see the "From Out of Nowhere" video for unequivocal proof), but for the most part, this thing was, to our ears, the real deal: something new we could call our own, and most importantly, jump on board with on the ground floor.

Somewhere along the line FNM got labeled with countless misnomers: funk rock, rap rock, funk metal; the list goes on. This was a sore spot with the band, and it was always a sore spot with me. When people thank Faith No More for paving the way for shitheads like Korn, it hurts me. Not sure why I'm mentioning that, but here we are. Anyway, FNM is deserving of a song-by-song breakdown, so here we go.

"From Out of Nowhere" - A perfect song to start this record off, because it gets right to it, barreling in with all instruments going full bore. Just when you think they might let up, Patton juts in: "Tossed into my mind, stirring the calm." He's got some lyrical stinkers on this record, but that ain't one of 'em. The Wikipedia article for this song claims the video was "purposely tongue-in-cheek." Well, you can't blame the fanboys for trying to defend their heroes. I tried to believe that for a while myself.

"Epic" - You know it, you used to love it, and now you're sick of it. I will always have a soft spot in my heart for this song, but I never need to hear it again. The band played it every time I saw them live, and by 1997, I was feeling pretty bad for them. It was barely worth it; Patton would sleepwalk through the entire thing. But when those opening chords came crunching in, people would always go nuts. So I guess they had to keep trotting it out.

"Falling to Pieces" - Yeah, they front-loaded this thing with the singles. We always liked this tune, eventually even more than "Epic." I always wondered why the video held onto a lot of the same motifs as "Epic," but what the hey. We watched the shit out of it anyway. A great big chorus on this one that was easy to love.

"Surprise! You're Dead!" - Probably the thrashiest song on the whole record, and a great one to wipe the slate clean after the trio of radio-ready tracks. This ushers in the remainder of the record, and it features Patton's first real go at the guttural wails that we would learn to cherish. They were playing this song live up until the dissolution of the bad as well. And we always enjoyed it. More of Patton's great lyrics on this one.

"Zombie Eaters" - Starts as a ballad, grows into a full-blown metal storm of mayhem. This was always one of the favorite tracks to rewind and play over and over, not only because it contained multiple sections and a flurry of changes, but because it's simply a solid song all the way through.

"The Real Thing" - The longest song on the album, and probably my favorite. Patton's lyrics are solid as stone, and his vocal parts are unstoppable. This song should also be considered one of Jim Martin's crowning achievements as the lead guitarist for the group. Some machine gun shit. I'm still not sick of this track.

"Underwater Love" - A valiant attempt by Patton to add some dark imagery to an otherwise corny song, but it doesn't really work. We ate it up early on, but this was probably the first song to ever be ceremoniously fast-forwarded from this record. And I'm sure it was a sad day.

"The Morning After" - The song that sounds more like Mosely-era Faith No More than any other track here. I guess this explains that. The verses on this song are bordering on ass rock, but the chorus makes up for it.

"Woodpecker from Mars" - The instrumental, and a damn good one at that. Roddy Bottum showing us that keyboardists can rock.

"War Pigs" - Never really understood this one. It's a fine cover, I guess, and since we weren't familiar with the original, we dug it.

"Edge of the World" - A great closer, as it's the most mellow song on the whole record. We thought it showed Patton's range (like we knew what we were talking about), and thought it was great that a rock band wasn't afraid to wuss out a little bit.

I don't listen to this record much anymore, but I still love seeing live footage of the band from this era. Ah, it takes me back. But, it's a shame that this record will always be the one the band is remembered for. Because their best stuff is yet to come...

"The Real Thing"
Posted by Wockenfuss at 2:52 AM

Yeah, that dubbed cassette saw a lot of play. There is definitely not another album in the world that I have heard more than this one. At this point I find "Underwater Love," "Edge Of The World," "War Pigs" and "Falling To Pieces" getting the skip button, but I will still crank it up for "The Morning After" and "The Real Thing." Just to explain how good and different this was, that dubbed cassette was rounded out by Warrant's "Cherry Pie" and Snap's "The Power" to fill up the blank space. A sign of the times. This is the album that finally allowed me to love music.