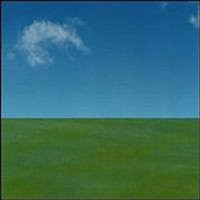 I may have a hard time not writing too much about this one.

This is one of the only records I have purchased new that now has visible wear on the LP from playing it too much. I'm meticulous about the care of my LPs, but this one was drunkenly flipped over so many times that it now still houses some minor scars. Still plays fine, though, so I don't need to panic. Which is good, because this has become impossible to find on vinyl. So, yes, I listened to it a ton. I still have it on my iPod, still never skip a track. It is that good.

I remember when my brother bought this CD (House of Records in Eugene–I must have still been living down there), but I can't remember exactly where I got it. I know it was shortly after it was released, and I'm almost positive it was somewhere in Portland. But now I'm wondering if I didn't buy it while I was still in Eugene, possibly at House of Records myself. It's all very important and confusing and not interesting, I know.

There are records that remind you of a time and place (and if I haven't given this corny spiel before, I'll give it again before I'm done with all of this I'm sure), and this one is the equivalent of a fucking transport device to me. My one-bedroom apartment on 24th between Alder and Ash; the bleak fall and eventual bleaker winter of 1999; white-blond-and-tattooed Sarah and I spilling our guts while we drank shitty beer, professing our secret love for Led Zeppelin and eventually each other. And we played this record over and over and we could not get enough of it and after playing it for a few other people and not getting the reaction we were looking for we decided to stop sharing it with anyone and just kept it to ourselves.

And even after Sarah was gone, I still kept listening to this record, putting it on while people were over but never insisting they pay attention; I just waited to see if they would ask me what it was. They rarely did. And I never understood it. To me, this is a perfect record, one that you'd have to be stupid not to latch onto. The Feelings were barely even a name in Portland. Ralf was still the guy from Built to Spill and the Halo Benders to most people. To me, he'll always be the guy from The Feelings.

As you can tell, I really can't say enough about this album. I was going to do a song-by-song breakdown on this one, but I don't feel like it. Really, all you have to do is listen to the first 30 seconds of the opening title track, and as soon as Ralf comes in with "You don't get drunk anymore/ You've forgotten what it's good for," you'll have an overwhelming urge to sit still and listen to the entire thing. If you don't, I can't help you.

Funny aside about The Feelings: two (maybe three?) of the guys in the band worked in the kitchen at my favorite Mexican restaurant when I first moved up to Portland. I used to become enraged at the injustice involved in Tim the microphonist dish-dogging it in a sweltering backroom when he should have been a local hero.

I may have been a tad bit too passionate about the band. If you find this album for cheap, buy it. Oh please, won't you buy it?

And if anyone knows of any audio sources for The Feelings online, I'll link it up. Or if you see me, I'll give you a copy of this album. Trust me, you need it.
Posted by Wockenfuss at 4:15 AM

I think I had the pleasure of seeing The Feelings somewhere around 6 or 7 times. They were one of those bands that I would go see every time they played, which didn't seem to be often. Some shows were better than others but they were always great. I once saw them play "Worse Than 43rd" which was just bizarre. Anyways, this album is nearly perfect. The only thing that this one has on the previous effort is the length, allowing the more challenging songs to fit in more comfortably amongst the poppier numbers. I also bought this at House Of Records, the same day I bought the full-length Long Hind Legs CD. Talk about money well spent. These are easily two of my favorite all-time albums. It is crazy to me to think how much this album influenced my little circle of Salem rock friends. My band at the time, Pretty To Look At, used to cover "Dearling Darling." I remember Becki from The Widgets liking it so much that she bought the Feelings CD. If Widgets singer Ballantyne isn't homaging the microphonist during his rap on "Waltz From Hell" then I am crazy. Hell, my later band even named ourselves The Dearling Darlings. So there you go. But yeah, the songs here are catchy, interesting without being too pretentious (except for "Banana Fandango"), and always different from one another. A rare pop band that put on a punk rock like show without it feeling forced. The somewhat chaotic, disorganized, drunken performances definitely appealed to myself and my friends. Obviously. Needless to say if you don't own this then you probably should, although who knows, sometimes I feel like maybe it is just a NW thing. Does that make sense? My teenage girlfriend hated this one just as much as the first, so there you go. "8th time I saw you was up at Thriftway." Genius.

Oh, and when PTLA covered "Dearling Darling," Matt would be Ralf and I would be the microphonist Tim. We also one time had a second guitar player who played the sweet guitar outro. If anyone really cares.