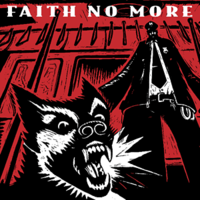 The years between Faith No More records were long ones. We played Angel Dust into the ground, and though we never got sick of it, we were always on the lookout for a new record. In the pre-internet days (I guess it was around by this time, but barely), you just had to keep your ears and eyes open.

We religiously watched a late-night Portland video show called "Bohemia Afterdark" (I'm sure I've mentioned this before), and it was always great for keeping us up-to-date on the happenings in "alternative" music. I'll never forget the night my brother and I were watching it, and before the little credits could even come up to say what the song was, we heard a riff hammer in and we heard a voice that could only be Mike Patton's. The song was "Digging the Grave," and we watched in awe as they reemerged before our eyes. As Beavis and Butthead would later say, and I'm paraphrasing, "Faith No More's back. And they've got a hot new look."

Patton was short-haired and mustachioed, looking streamlined and possessed. Roddy Bottum had bleached his cropped hair platinum blond, and Billy Gould had also chopped his locks off. Jim Martin was nowhere to be seen. Mike "Puffy" Bordin looked exactly the same. This got us riled. We were ready for the new record. I was living in Eugene at the time, and I was broke as a joke. Luckily, a dude who lived in my apartment was also a FNM fan, and he bought the CD. I made a dub, and I was set. Boy, did I listen to this record.

When it comes to my favorite all-time Faith No More album, it's neck-and-neck between this one and Angel Dust. While I would possibly concede that Angel Dust is probably the more important, and possibly "better" (I put that in quotes because there are many meanings in this case, and I don't have the energy to list them all) LP overall, King for a Day... is the one I'm pretty sure I would take with me to the desert island if I was only allowed one Faith No More record. As with their other albums, this one was the soundtrack to my life for a good two years. I could go on forever. Eh.

Oh, I should mention, Jim Martin was gone for good. He was replaced in the studio by Trey Spruance, Mr. Bungle's guitar player. And he is good. Real good.

"Get Out" - With individual credit being offered in the liner notes, we noticed that this was written solely by Patton, only the second FNM song he wrote on his own (the first was "Malpractice"). If we needed any more reason to love this haymaker of an opening track, that was it. The first line was perfect for this record, especially considering the reportedly fragile state of the band: "What if there's no more fun to have?" Just pure madness, and it would foreshadow the themes of alienation and doubt that run through every song on the record.

"Ricochet" - I have always considered this one of my favorite FNM songs (that's becoming a long list, I know). This is also one of the many songs on the album that references drinking: "All of this thick time without you/ Has made me so thick and drunk." I'm always careful to not read too much into the lyrics on their records, but it's a reoccurring theme on this one. The animosity and vengeance that sprawls out of this song makes it one of the best tracks ever to listen to when you're pissed at someone.

"Evidence" - The smooth and sultry single that somehow never seemed too out of place to me. Plus, the video assuaged any fears that they were taking themselves too seriously. A good song with a great chorus.

"The Gentle Art of Making Enemies" - Where we find Patton really outdoing himself. This song is both melodic and brash, with a really catchy chorus and verses that feature some great, great lines. Both "happy birthday, fucker" and "if I tighten up my hole/ you may never see the light again" are ingrained in my brain forever.

"Star A.D." - This is a bit like "Evidence," in that it's got that sort of slinky feel to it. There's horns, or more likely synth horns played by Roddy, and it almost feels like a lounge number. Of course, it delves off and gets into some fantastically weird shit in the second half. Yep, great.

"Cuckoo for Caca" - Ah, will I ever get sick of this song? Probably not. This song is angry as shit, though I can't really figure out who that ire is aimed at. Seems like it's about assholes doing cocaine, but that seems too obvious. Weirdest line on the record: "Eat is just as deep as you can fuck it." My god, this song rules.

"Caralho Voador" - Another lounge-type number. If you asked me to list all the tracks on this record, this might be the one I forget. The odd name doesn't help, and it's always acted like a comedown after "Cuckoo for Caca." Nice track, though.

"Ugly in the Morning" - I always chose to believe this song was about being hungover. "I did it to myself again" - that line really seemed like the lament of a man who drank too much. The last minute of this song finds Patton proving that he is the greatest vocalist in rock.

"Digging the Grave" - I talked a little bit about this one already. I may never grow tired of this track. We went to see the band on this tour, and they opened with this song. I will never forget the feeling I got when they busted into it. I wasn't sure whether I should vomit, cry, or urinate. Turns out I was paralyzed from the awesomeness, so it all worked out.

"Take This Bottle" - Other than being about a minute too long, this country-ish song is great. Now, this one it definitely about drinking. Patton: versatile.

"King for a Day" - Oh, how I could romanticize this song. I'll try to restrain myself from gushing too much, but it really doesn't get a whole lot better than this. More bitterness here; this one seems to be about assholes drinking wine at a party. And so much more. Six and a half minutes and it doesn't drag a bit. It's songs like this that really made me wonder why these guys weren't the biggest band in the world.

"What a Day" - I've always thought this one was about drinking as well, but really I think it might be about a serial killer who's waiting to get caught. Really I have no idea. But "What a day, what a day/ If you can look it in the face/ And hold your vomit"? That's pretty good.

"Last to Know" - I've always felt this track got sold short by being sandwiched between some really huge songs. It's not a bad song, but it's maybe one of the least memorable ones here. Still, I've learned to love it over the years.

"Just a Man" - If anyone ever compiles a video montage tribute to me, I would like this song to be the soundtrack to that film. That is how strongly I feel about the merits of this track. It is bigger than life (my life, at least).

Bottom line: if you don't own this record, you are missing out on one of the finest musical accomplishments of the past twenty years, and I don't know how you sleep at night.

There, I said it.

"Ricochet"
Posted by Wockenfuss at 3:33 AM

The subtraction of Jim Martin coupled with the addition of Scummy on guitar creates an FNM album that somehow manages to not only outdo "The Real Thing" but also "Angel Dust," something that at the time I doubted would ever happen. I vividly remember that "Bohemia Afterdark" moment and being filled with Christmas Eve like excitement. They just looked so awkward. And yet here they were playing an incredibly awesome song. I know for a fact that I listened to "Digging The Grave" everyday the entire summer after this came out. I used to brag about it. Once again, every song on here is pretty much unbeatable. I always felt bad for Martin that they dumped him and turned in some of the heaviest buttrock of their careers. I pretty much agree spot on with your track by track review so I'll just say that this gets my vote for best FNM album. Even though this is their 5th album, 3rd with Patton, this to me always seemed to be their awkward sophomore album. Patton's mustache w/ sweatshirt era is one I never grow tired of.