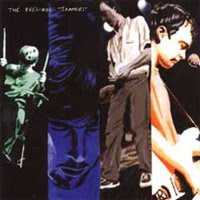 I gotta tell you, if someone had told me their was ever going to be a posthumous (the members weren't dead, but the band was) Feelings album that contained unreleased tracks and remixes, I would have scoffed. I think I scoffed even when I saw it. Then I bought it.

The idea of a for-hardcore-Feelings-fans-only disc really threw me for a lop, and it still does. I'm grateful for this CD, because parts of it are quite good and it's cool to hear what they were working on before they called it quits, but the actual tracks feel half-done and the remixes are a lot to handle in parts.

If you like their two proper albums, then this is a must-have.

But you might not want to start here.
Posted by Wockenfuss at 5:08 AM

I should like this more than I do. Honestly, I sometimes forget this exists. The last few times I saw them I remember them playing a few new tunes and not really feeling them. I especially remember "My First Idea" as being a song that no one in the audience, or the band for that matter, seemed to enjoy. Tim even performed it solo one time, which was brutal. There was no joy in the new songs and, even at the time, it gave me the inkling that they wouldn't last much longer. And they didn't. Out of the five songs here, only one, "Misty Says," seems to approach the work that they had previously put out. While I am glad to have these songs I regard them more as a footnote, not some look at an unfinished masterpiece. And the remixes are just pointless. Didn't they have some poorly recorded live stuff? Now that I would dig.