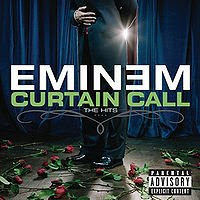 By this point, I became convinced that Eminem was just fucking with us.

"Fack," the song that leads off this greatest hits compilation, is dumb even by Slim Shady standards. And "Shake That," a duet with Nate Dogg that is one of the other unreleased tracks on this album, is a potty-mouthed club throwaway that never should have seen the light of day. Nate Dogg actually says "I get more ass than a toilet seat."

"When I'm Gone" is Em in full-blown 2Pac wannabe mode, recording a song that will become forever poignant (and eerie even!) if he ever gets shot and killed. Until that happens, it just seems kind of corny. Though it sparked some conversation: Em's hair isn't dyed blond in the video, so the theory that he "killed" Slim Shady at the end of Encore now holds even more water.

It's all very interesting.