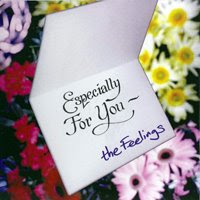 The Feelings should have been a bigger band than they ever were. Part of the problem was they were extremely hit-or-miss live; really pressed against one side of the spectrum or the other. I only saw them once, opening for Imperial Teen in the early 2000's. I thought they were great. A little drunk, but they kept it together. My brother saw a show where they were a lot drunk and couldn't keep it together. I would meet singer/guitarist Ralf Youtz years later and see him quite a bit (long story), and he once related to a me a story about keeping a bucket on the side of the stage so their "microphonist" could run over in between songs and throw up in it.

I don't think he was kidding.

The band also may have an off-putting sound, though I've never been able to hear that side of it. It is different, I'll admit that, but I loved them the first time I heard one of their songs. According to my notoriously unreliable memory, my first exposure to The Feelings (I challenge you to come up with a better band name than that, btw...oh and fuck these guys) was via one of my brother's lo-fi mix tapes. Combined with the additional lo-fi-ness of this album, it made for some muddled listening. But, the beauty of "TKO" shone through with it's own brand of clarity.

I think another mix featured the insanely catchy "* L--" (yeah, that's a song title), and I was hooked. I don't remember when I actually picked this up on a proper CD, but I'm fairly certain I had a dub of it. Though I think most of these songs ended up on mixtapes, so maybe that's what I'm thinking of. Anywho, this is a great record. I could do without the boombox recording of their ridiculous cover of "Born to Run," but that's just because I'm a spoilsport like that. I do prefer their version to the original, though.

I think the group is still finding their sound on this record, and it isn't fully realized until the next one. And that's not to discount the merits of this disc, because it has many. I just think the follow-up is one of the best records to come out of the NW in the last 20 years. And we'll get to that. But this one is lo-fi pop at its finest, recorded shakily and executed a bit shakily as well. It only adds to the charm and makes it more fun.

If you ever see this in a bargain bin (and sadly, you might), buy it. You will not be disappointed.
Posted by Wockenfuss at 3:52 AM

I first saw The Feelings at La Luna opening for Pond and Archers Of Loaf (ah, the glory days). I was immediately transfixed by their on stage set up. Drummer? Check. Guitar player/high-pitched singer, standing next to the drummer, near the back of the stage? Check. Portly keyboard player? Check. And then they had some other guy, who would sit on the stairs behind the stage until he would periodically saunter on stage to talk into a microphone, after which he would go sit back down. Needless to say, I was in love. I finally found their first CD in Eugene at House Of Records and proceeded to dub it and listen to it in my car way too much. It was totally different and yet totally brilliant. A tad poorly recorded yes, but this actually added to the charm for me. Pretty much every tune on here could be on a mix tape, save for "We Called" which is just a tad too long and redundant. I remember my teenage girlfriend at the time being extremely unstoked on this album. And their "Born To Run" cover owns. I did send away for the Feelings songbook offered in the CD but never received one. Just so everyone knows. More on how much I love this band on their next album.