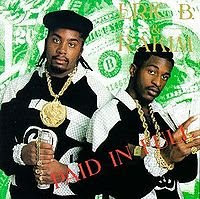 This is another classic rap album that I never owned as a kid, but picked up much later in life. I distinctly remember having "My Melody" on one of the few cheap-o rap compilation cassettes I had back in '89, but for the life of me I can't figure out which one it was. No matter.

Listening to Paid in Full now, it does sound quite dated, and it's a bit tough to grasp just how mind-blowing this was twenty-some years ago. But, if you listen to what chumps like LL Cool J were doing at the time and then listen to this, it becomes pretty clear. Rakim was taking pride in his lyrics when most rappers were just stringing some weak boasts together between choruses. Plus, his smooth flow made his delivery that much cooler, with the added benefit of making it seem like this was all way too easy for him.

The beats are basic, but the heavy sampling was a little thicker than some of the other records at the time, and it added to the overall punch. Like everything else on this record, it was, in retrospect, a clear sign of things to come. If you need proof of this record's influence on hip hop, try and count how many of Rakim's lines have been repurposed by other rappers over the years. You'll lose track pretty quick. Not to mention how many times this record has been sampled by other artists. It's some blueprint shit, and there's not a rapper or rap fan alive who'll argue with that.

Does it make for great listening today? I think it does. Rakim's got some throwaway lines scattered around the record, but for the amount of words that he strings together, he keeps the filler to a minimum. Speaking of filler, I've never understood why they put the DJ cut (which was a given at the time) "Eric B. Is On the Cut" in the second slot. It was fairly standard to have those close out the album. Also, sort of odd that there are two six-minute-plus songs on this one. They drag a little, but I still yearn for the days when rappers weren't afraid to pull that move.

I should probably own Follow the Leader, too. But I don't.