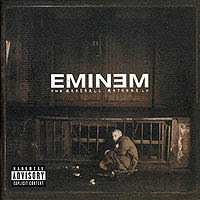 If anyone had any doubts about Eminem's abilities in the wake of The Slim Shady LP, they were squashed when this album hit. He basically kept the same formula as the first record (MTV-friendly first single, anger anthems, help from Dre, even revisiting some of the same skits), but did everything better.

The first time I heard "Kill You," I knew this record was going to be huge. "Offensive" lyrics or not, it's just a great song, especially when it's opening a record like this one. The fact that people took any of this shit seriously just confirmed Eminem's genius as a both a lyricist and a rabble-rouser. Everyone was playing right into his hands, and watching him enjoy it was fantastic. People who attempted to transform this record into something divisive had no chance of proving their tired point, which was fine by me, because I never understood it in the first place.

"Stan" became, at almost seven minutes long, an unlikely radio hit, and to me, a song that got old a lot faster than some of the other ones. Same with "The Way I Am." I really liked that song a lot when this first came out, but some of the other cuts have proven to hold considerably more staying power. "Marshall Mathers" is still great, "Bitch Please II" will always be fun, and "Criminal" is the perfect bookend to "Kill You," turning out to be just as acerbic and intense in closing, which is tough to pull off after the thickness of this record.

Let's not kid ourselves, there's some iffy tracks on this one. "Kim" is too long, and while the concept is interesting, it's not a song that can be listened to over and over. "Amityville" introduced a lot of us to the lyrical infancy of Bizarre, a half-wit who spits such memorable lines as "I fucked my cousin in his asshole," and then leaves us waiting for a punchline that never comes. The rest of D12 shows up on "Under the Influence," and while the results of the guest spots are stronger, the chorus ("You can suck my dick if you don't like my shit...") is one of the worst in the Slim Shady catalog.

So, I think maybe people get a little ahead of themselves when they start calling this "one of the greatest hip hop albums of all time." It would really depend on how long that list was. But, this is certainly an album of a distinct time, and it was impressive how much this thing influenced culture in the beginning of the new millennium. I was at a party in 2000, and we were drunk and dancing in someone's front room to this record. A young lady (who clearly fancied herself above this sort of drivel) was glaring at us from the corner. Given, I'm sure we were being obnoxious, but that wasn't her beef. She waited for a song break and yelled: "Oh my god guys! Don't you realize you're dancing to Eminem?"

I understood what she meant. And yes, in a perfect world, we might all be better than this. But sometimes, that's just not the way it works out. For some reason, as corny as it sounds, that little story has always summed up the appeal of this album for me perfectly.

"Marshall Mathers"
Posted by Wockenfuss at 2:30 AM