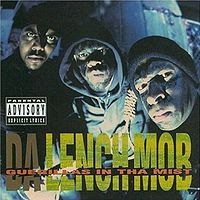 If you're looking for more Death Certificate/Predator-era Ice Cube, this is about as close as you can get. Cube was responsible for the Da Lench Mob, and he's all over this thing. Thankfully, the actual Mob can hold their own as well, so this record ends up being really damn good.

This is early-90's West Coast gangsta rap, and it bumps. Cube oversaw/produced the whole thing, so the beats sound – for the most part – like outtakes from Death Certificate. This thing is wall-to-wall with thick grooves heavy on the samples, and all kinds of hooks. It might not be quite as fancy as Cube's solo joints, but the point here seems to be roughness. The dudes in Da Lench Mob are clearly more gangsta (in real life) than Cube ever was, and their street tales usually skip the humor and go straight for the bloodshed.

However, they're also capable of having some fun. "All On My Nut Sac" is a nice companion to Cube's "Get Off My Dick...," and features a huge hook that nicely ties in all the tales of folks who won't get off the jock. Cube drops some dope rhymes on the cut, and he shows up here and there throughout the record. B-Real from Cypress Hill guests on the equally critical-but-funny "Ain't Got No Class," and adds plenty of nasal to the chorus.

And the rest of the songs here are all solid. At less than 45 minutes, Da Mob does a fine job of getting in and getting out. The record goes by quick, and the pace never slows. There are a few short "insert" tracks, but no skits to bog anything down.

I found an import (French, I think) copy of this last year and jumped on it. And I'm glad I did.

"Guerillas in tha Mist"
Posted by Wockenfuss at 1:22 AM