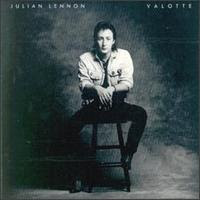 I don't want to give Julian Lennon too much credit, but come on: this record had to have surprised some people. Clearly, if it wasn't for his last name, he wouldn't have been making his debut on a major label, and clearly he wouldn't have received such easy access to radio play, but these songs deserved it.

Or at least the two major singles did. The title track is a production masterpiece, with tons of elements coming together and hardly stepping on each other's toes. On top of that (which has to be credited to seasoned producer Phil Ramone), Julian holds his own. His lyrics aren't mind-blowing, but the melody in this song is strong. The next couple tracks lean towards a harder sound and don't work quite as well, but when he gets back into the synth-pop on the final two first-siders, it ain't bad.

But, let's be honest with ourselves here: the real reason I bought this record is because "Too Late for Goodbyes" is one of the most underappreciated songs of the mid-80's, and I can't get enough of it. If 1984 hadn't been such a monumental year for pop music, the song probably would have been a huger hit than it was. It's a good one.

The rest of the record holds up fairly well, too. Other than the two big singles, "Say You're Wrong" is the other standout here, and it's another one that owes some credit to production. Still, it's a catchy little track.

Julian Lennon's in a rough spot, and the dude needs to be cut some slack. He ain't his dad, but I don't think he ever said that he wanted to be. The guy can write a nice pop song (or at least he could back then), and that's more than most people can claim.

"Too Late for Goodbyes"
Posted by Wockenfuss at 1:00 AM