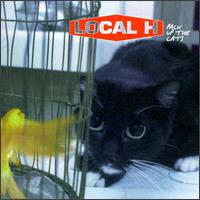 This album will always remain Local H's crowning achievement. It's retardedly good, and yet destined to live forever in bargain bins. That must drive them nuts.

This record is such a step forward from As Good As Dead (which is pretty good, too) that it seems like Scott Lucas spent the two years in between the records holed up at a songwriting camp or some shit. The songs are bigger, smarter, and catchier. And once the thing gets started (with the awesome "All-Right (Oh, Yeah)," there's barely time for a breath. The tracks all run together, and they are all good.

Someone gave me this album, and honestly, after their debut, I didn't expect it to be great. As Good As Dead is plenty solid, but there are parts where it teeters. It seemed there was little room for things to get better, but plenty of room for stuff to either stay the same or slip a little bit. I was way off. This is one of the great underrated rock albums of the second half of the 90's. It came out at a weird time, and maybe that's why it got swept under the carpet. The poorly written Wikipedia page for this album suggests label issues, but who knows.

Man, I haven't listened to this in a while, but I forgot how consistent it is. Every song is great. There's even a track called "Deep Cut," a two-minute guitar-hammerer that (of course) is the penultimate song on the album. Nice touch.

I'll be the first to admit that Local H ain't for everybody, but if you want to give them a shot, I'd start here. As far as a full album experience from them, it doesn't get any better.