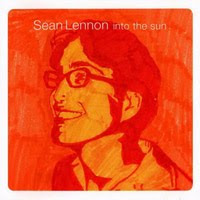 This is another one of those records that caught me at a particularly vulnerable time in my life, and as a result, might speak to me more so than it does to other people. For the record, I think this album is brilliant, and terribly overlooked. I think it may have achieved some success, but not nearly as much as it deserved. There's hardly a bad moment here, and that's tough to do in the realm of straightforward pop music.

I moved from Eugene to Portland in the summer of 1998, right after Into the Sun was released. My new roommate in Portland had purchased the record (possibly just because it was released on the Grand Royal label), and he had taken to playing it when we were hanging out. I certainly knew of Sean Lennon, but never thought much about him one way or the other. After hearing the album a few times, it started to sink in.

As if I needed help completely taking the leap, I started hearing it at my job. I was working for a high-end natural food store that had just opened in a suburb of Portland, and as a new-fangled plan to make it the market of the future, they had incorporated music into the shopping experience. There was a wall that featured LP-sized album covers of up-and-coming artists, and all the music piped through the store came from the albums on that wall. I think maybe a light appeared over the album cover that was playing at the moment. And the CDs were available near the checkout. Anyway, Into the Sun was one of them. (I can't remember any of the others except for Beth Orton. It was mostly harmless pop like that.)

So, through these two channels (on top of taping it and having it in my car), the record wormed its way into my mind and never let go. I had a miserable summer that year (moving cities proved to be rough going), but hearing bright pop like this was one of the only things that could temporarily distract me.

Maybe other people love this record as much as I do, but I've never gotten that vibe. I could see people thinking it was simple. Or cutesy. Or not giving it a chance because of his last name. I was just always so surprised by how infectious this record was (and still is).

I'm still not sick of it. Look for it in bargain bins and score yourself a deal.

I went to Bumbershoot in 1998 and happened to catch Cibo Matto. The funny thing is that I noticed that Sean Lennon was playing bass for them. I know that it was after this album came out and I thought it was bizarre that he was just on the side of the stage, rocking the bass. That's all I've got.