Stallion Alert at the Movies: Dreams to Remember: The Legacy of Otis Redding (2007) 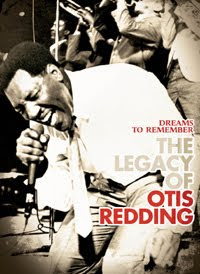 If you have any interest at all in Otis Redding, do yourself a favor and Netflix the shit out of this movie. It does everything right. They only interview a handful of people (the important ones), and they show every musical performance in its entirety. There is nothing more frustrating than watching a music documentary where they cut off a song in the middle. Or start it in the middle. Or just don't show the whole fucking song. There are a gang of performances here, all in chronological order (yes!), interspersed with stories from Steve Cropper (Booker T. & the MG's) about the writing and recording of each track.

Seriously, this was my kind of movie. While it probably doesn't offer much new to the hardcore Otis fan, for someone like me who loves the music but hasn't gone out of his way to view rare clips, a lot of this stuff was new. Most of this stuff was new. Sure, Otis is lip-syncing a lot of it on American Bandstand and shows like that, but it's still fantastic just to watch him work. And the performances where he's actually singing are just insane. They show "Shake" from Monterey and it's enough to make you crap your pants.

Steve Cropper's got an air-tight memory, and his stories about the songs are like little liner notes before each performance. They also talk to the founder of Stax Records and one of the guys who played horns in the Mar-Keys. They've got some good stories as well, but it's Cropper who really relays the info.

Not really any notable bonus features, but the film itself is really well done. Listening to Otis sing for 90 minutes is a pleasure. I could have listened for an hour more. I mean, seriously. Have you listened to "I Can't Turn You Loose" recently? It'll make you question why they bothered to continue R&B music after they finished that song. They got it. It wasn't ever going to get any better.

Check a preview here.
Posted by Wockenfuss at 1:53 AM