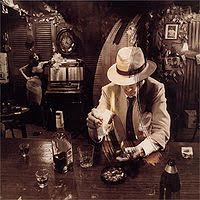 The picture I'm using is the cover of the LP I have. As you may know, there are six different cover variations which, if I was a Zep fanboy to a higher extreme, would force me to collect all of them. As it stands with Zep, I'm just happy to have the music.

The original LPs also came wrapped in brown paper, but I bought mine without it. It's not rare to find them with the paper cover intact, but it seems that more often than not, original copies are missing it. Fun fact I learned while looking farther into the album art on this one: The inner sleeves of this LP feature black and white comic-like art, and if you wet them, they become colored. I licked my thumb, wiped it on mine, and sure enough: the black streaked red. I had no idea. More info on this elaborate cover art here.

Listen, I'm by no means glad that John Bonham died a year after this album was released. And I'm a bit curious to have heard what the 80's would have held for Led Zeppelin. But if it was going to be anything like the schmaltz that's on this record, I'm happy the band was forced to call it quits. Of course I'm half-joking, but tracks like "All My Love" and "Fool in the Rain" are borderline embarrassing. (I actually have a soft spot for "Fool in the Rain," but it's for personal reasons. I still stand by the fact that it's a shitty song.)

Also, I take back what I said about "D'yer Mak'er" being the second worst Zeppelin song. I completely forgot about "Hot Dog" off this record. It's really neck and neck between that one and "Down By the Seaside." Wow, I think "Hot Dog" might actually be worse. It's rockabilly being played by Led fucking Zeppelin. There's no call for that.

Now, this record isn't completely worthless. "In the Evening" is a great opener, and a genuinely badass song. And "Southbound Suarez" is also fairly strong. But after those first two, it gets rough. Side Two opens with "Carouselambra," which is about eight minutes too long and the synths on it are shameful. "I'm Gonna Crawl" ends up being the last song on the last Zeppelin album while Bonham was still living, and though it's not a great tune, it seems fitting that the band gets back to the blues and leaves out the frills.

The word has always been that Jimmy Page was deep into heroin at this point (the video below shouldn't leave any question about that), and didn't take control of the band like he usually did. Apparently this gave Robert Plant the opportunity to freely wuss out to his heart's delight.

It's tough to hear Zeppelin not rock.

"In the Evening"
Posted by Wockenfuss at 1:52 AM